India 'A' stand on the verge of a probable series defeat after suffering yet another batting collapse in their second innings against West Indies 'A' on the third day of the third and final unofficial cricket Test. 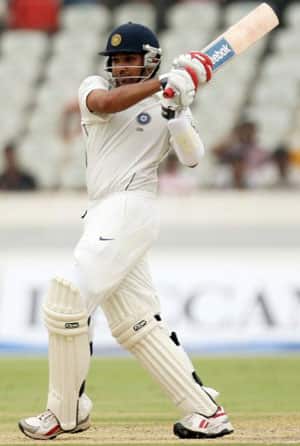 India ‘A’ stand on the verge of a probable series defeat after suffering yet another batting collapse in their second innings against West Indies ‘A’ on the third day of the third and final unofficial cricket Test.

After conceding a crucial 106-run first innings lead to West Indies ‘A’, India’s top-order yet again disappointed as the visitors ended the third and penultimate day at 181 for seven in their second essay, still trailing the home team by 75 runs.

After India’s first four wickets fell cheaply for just 35 runs, Manoj Tiwary showed some resilience with a gritty 62 off 119 balls to take the visitors forward in their second innings in wicket-keeper Wriddhiman Saha‘s company.

At stumps on day three, Saha remained unbeaten on 48 while giving him company was Shami Ahmed on 16.

With a healthy first innings lead on their side, Johnson and McClean bowled aggressively to put the hosts on top.

Johnson, who has dismissed Abhinav Mukund four times on the tour so far, had his man again when he got the out-of-form India opener to edge one to keeper Devon Thomas. Mukund’s sequence of scores on the tour read a poor 0, 0, 8, 8, 10 and 20.

The Chennai batsman’s dismissal brought the rain, forcing the players to walk off the field at the Beausejour Stadium.

On resumption, India were dealt a blow again as Ajinkya Rahane had no answer to a perfect outswinger by Johnson.

India were 23 for two when Rahane gave Thomas his second catch of the day.

There was another setback in store for the visitors as in-form skipper Cheteshwar Pujara too failed to make a substantial contribution, thanks to a brilliant catch by Kieran Powell at gully off McClean’s bowling.

Rohit Sharma also perished soon, handing a catch to Kyle Corbin to give Johnson his third wicket of the day.

But then Tiwary and Saha forged a 95-run fifth-wicket stand to take India forward before the former fell LBW to McClean.

Jalaj Saxena then became McClean third victim before leg-spinner Devendra Bishoo cleaned up Akshay Darekar to pick up his first wicket of the innings.

India A had won the first unofficial Test by two runs before West Indies A levelled the series with a thumping 125-run win in the second match. (PTI)

Chris Gayle declares himself fit for second ODI against England