Virender Sehwag's experiment to bat in the middle-order didn't yield any favourable result while Gautam Gambhir's woeful run of form continued as India A reached 191 for three at stumps on the second day of their second unofficial 'Test' against West Indies A in Shimoga on Thursday. 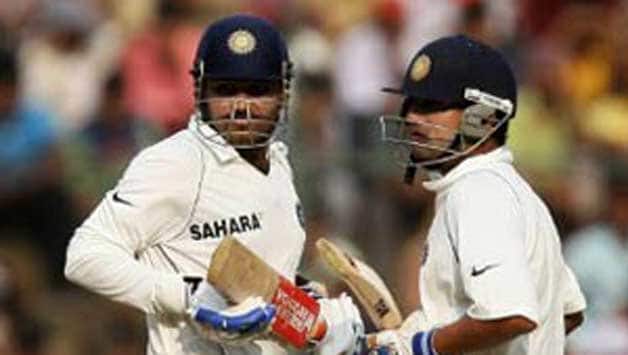 Virender Sehwag‘s experiment to bat in the middle-order didn’t yield any favourable result while Gautam Gambhir‘s woeful run of form continued as India A reached 191 for three at stumps on the second day of their second unofficial ‘Test’ against West Indies A in Shimoga on Thursday.

After West Indies A scored a decent 406 in their first innings, opener Gambhir (11) and No. 4 Sehwag (7) played atrocious shots off left-arm spinner Veeraswamy Permaul‘s (two for 60) bowling to get back to the cooler confines of the dressing room.

Unheralded Kerala opener Vasudevan Jagadeesh showed a lot of temperament as he remained undefeated on 79 in the company of in-form Abhishek Nayar, who again showed his utility with an useful 56.

Youngster Jagadeesh, who narrowly missed out on a century during a ‘Test’ against New Zealand ‘A’ earlier this year, showed a lot of composure during his 172-ball knock that included eight boundaries.

Nayar was in his attacking self as he smacked seven boundaries and a six in only 38 balls, coming into bat after skipper Cheteshwar Pujara (25) was dismissed after a dogged effort.

India were 215 runs behind West Indies A and require another 66 runs to avoid follow-on at the Jawaharlal Nehru National College of Engineering Cricket grounds.

The capacity crowd — mostly engineering students were left high and dry by the Delhi duo Sehwag and Gambhir, who not only disappointed fans but also didn’t make a case for the two national selectors Roger Binny and Saba Karim, who have come to especially watch the senior players.

Gambhir didn’t look comfortable at all against seamer Miguel Cummins as he struggled for 43 balls with just a boundary to his name. Left-arm spinner Permaul got his scalp in his third over as Gambhir tried an ugly hoick but managed to offer a dolly to Fidel Edwards.

While Gambhir ran out of patience, Sehwag wasn’t even patient enough to grind it out as he played a dozen deliveries before trying to give Permaul the charge only to get stumped in the process.