India A register easy victory against New Zealand A

India A register easy victory against New Zealand A

India A made heavy weather of a small chase before beating New Zealand A by three wickets in the first unofficial ODI cricket match at Lincoln on Wednesday. 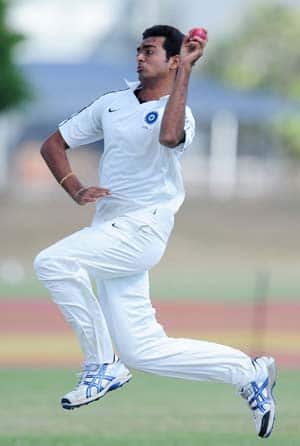 India A made heavy weather of a small chase before beating New Zealand A by three wickets in the first unofficial ODI cricket match at Lincoln on Wednesday.

Electing to bowl first, the Indians packed off the hosts for 176 before surviving some anxious moments to overhaul the target in 47.2 overs.

The match took two days to complete after it was postponed on Tuesdat due to unfit pitch at the Bert Sutcliffe Oval.

The Indians kept it tight in the bowling department with Jaydev Unadkat being the wrecker-in-chief with a four-wicket haul.

The Kiwis suffered the first jolt in the sixth over when opener Hamish Rutherford went after facing 13 deliveries that could not fetch him a single run.

The hosts were five down for 51 runs before wicketkeeper-batsman Derek de Boorder (62) and skipper Andrew Ellis (45) combined for an 80-run stand. Boorder was the more aggressive of the two batsmen, slamming four boundaries and a six in his 85-ball knock.

But apart from that, New Zealand A’s batting floundered miserably as Bhuvneshwar Kumar and Rahul Sharma picked up two wickets apiece in their respective quota of 10 overs.

The Indian chase was off to a steady start with Abhinav Mukund (20) and in-form skipper Unmukt Chand (32) putting up a 51-run opening stand.

Unmukt, who was the star of India’s Under-19 World Cup triumph recently, struck three fours and a six in his innings that came off 58 balls.

But once the two departed, it triggered a collapse of sorts with Mandeep Singh being the only middle-order batsman to make a noteworthy contribution — a 66-ball 34 that included a four and a couple of sixes.

But the lower-order duo of Ambati Rayudu (26) and Rahul Sharma (31) chipped in to rescue the team from a precarious 115 for five.

Rahul’s innings was the more dramatic of the two as it came off just 33 deliveries and included three hits to the fence and a couple of sixes. Before becoming Colin de Grandhomme’s only victim, Rahul did just enough to ensure an Indian win.

Medium pacer Mitchell McClenaghan was the most successful bowler for the hosts grabbing three wickets for 42 runs in his 10 overs.

The second match of the series will be played on Friday. (PTI)