India A take control against West Indies A at Kensington Oval

India A take control against West Indies A at Kensington Oval

The pace-spin combine of Shami Ahmed and Rahul Sharma shared six wickets as India 'A' bowled out West Indies 'A' for 252 on the opening day of their four-day unofficial cricket Test at the Kensington Oval. 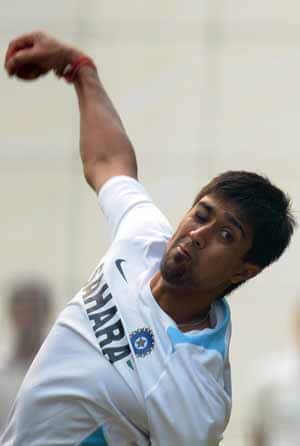 The pace-spin combine of Shami Ahmed and Rahul Sharma shared six wickets as India ‘A’ bowled out West Indies ‘A’ for 252 on the opening day of their four-day unofficial cricket Test at the Kensington Oval.

It took the Indians 87.3 overs to send the the host team back to the pavillion and make a dominating start in the three-match series.

Wickets tumbled at regular interval and had it not been for half centuries by wicketkeeper Devon Thomas (57) and lower-order batsman Veerasammy Permaul (66), the Caribbean side could well have folded up much earlier.

For India, Ahmed and Rahul picked up three wickets apiece, while medium pacer Bhuvneshwar Kumar also did his bit by knocking off a couple of scalps.

It was a sedate start to the proceedings with Kraigg Brathwaite and Lendl Simmons pulling off just one boundary in a 20-run stand which ended when the latter was trapped leg-before by Bhuvneshwar. The right-hander contributed 11 runs to the total before his departure.

Just two runs later, Ahmed struck for India as Brathwaite, who also made 11, was caught behind by wicketkeeper Wriddhimaan Saha.

The hosts looked in deep trouble when they were reduced to 36 for three following the dismissal of Donovan Pagon by Ahmed before Nkrumah Bonner and Jonathan Carter stitched together 44 runs for the fourth wicket.

Carter was the more aggressive of the two, striking down seven boundaries in his 47-ball 35 before part-time spinner Rohit Sharma had him caught by Shikhar Dhawan to fetch his only wicket of the day.

Bonner was the cautious customer, taking 94 deliveries for his 25 runs that included just one boundary. But he could not make much of the patient effort as Rahul sneaked one past his defence to rattle the stumps, leaving the West Indian side at a precarious 5 for 101.

Scoring at less than three an over, the hosts needed acceleration and stability at the same time and Permaul and Thomas combined together to do the rescue act.

The duo shared 14 boundaries with Permaul getting six and Thomas fetching eight of them. From a rather bleak position of 126 for 7, Permaul and Thomas steered the West Indies innings immaculately, putting on 92 runs for the eight wicket.

However, leg-spinner Rahul struck at the nick of time for India by clean bowling Thomas to break the stand before the visitors cleaned up the tail with ease. Rahul’s crucial three wickets cost just 73 runs in 22.3 overs.

Ahmed, on the other hand, was equally miserly, grabbing his three wickets after conceding 43 runs in 16 overs. Pacer Ashok Dinda also managed a wicket, giving away 41 runs in his 17 overs.

The second and third match of series will be played at Kingstown and Gros Islet respectively. (PTI)

Broadcasters, IPL franchises want CLT20 to be organised in India