India A will play against Australia A, South Africa A and CA's National Performance Squad in the ODI series which begins from August 13.

India ‘A’ team will be touring Australia for the winter’s ‘A’ series that will feature South Africa A as well. Cricket Australia announced that India A would play against Australia A, South Africa A and CA’s National Performance Squad in 50-over series that will see the 4 teams competing against each other. India A will then play 2 unofficial Tests against Australia A at the Allan Border Field in Brisbane in the month of September. The One-Day series will commence from August 13 and will see matches being hosted in Townsville and Mackay. Meanwhile, Australia A have already announced a strong 24-man squad for the series involving the 4 teams. ALSO READ: Shreyas Iyer ‘bit disappointed’ for not being picked in Indian team for upcoming tours

CA’s General Manager of Team Performance, Pat Howard said the series hold its own importance, as they look to recognize the talent and skill that young cricketers can bring out for the national team. He said – “This is an important series for developing and growing the depth of talent in our pathways.” He further said – “Players in the Australia A and National Performance Squad have been identified as having the potential to play for their country and the national selectors will be watching this series with interest.”

He felt India A’s and South Africa A’s inclusion adds an altogether new dimension to the series as well. “India and South Africa are strong competitors with wide-ranging skills to challenge our players and build their experience against high-quality opposition,” Howard said.

Here’s the schedule for the quadrangular ODI series:

A similar series also took place in 2014 when Australia A had traveled to India for two four-day matches and a 50-over tri-series, which also included South Africa A along with India A  as the hosts. 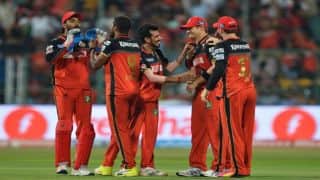 Royal Challengers Bangalore in IPL 2016, Review: Marks out of 10