India A vs Australia A 2015: Pragyan Ojha shines with remodelled action on Day 2 of 1st unofficial Test

India A vs Australia A 2015: Pragyan Ojha shines with remodelled action on Day 2 of 1st unofficial Test

Another interesting aspect of Ojha's bowling was that he was wearing half-sleeves and that too without any elbow protection.

Chennai: Back in the mix after one and half years, left-arm spinner Pragyan Ojha justified the selector’s faith by rocking Australia A top-order with three quick wickets as the visitors reached 185 for four against India A at stumps on the second day of the first unofficial cricket Test. Bowling with a remodelled action, Ojha finished the day with figures of 3/52 as he had at one stage reduced Australia A from 57/1 to 75/4 in a space of 23 deliveries. However Marcus Stoinis (42 batting) along with Peter Handscomb (75 batting) conjured an undefeated 110-run stand for the fifth wicket to stem the rot. READ: Live Cricket Score India A vs Australia A, 1st unofficial Test at Chennai, Day 2: AUS A 185/4: Visitors trail by 116 runs at stumps

Another interesting aspect of Ojha’s bowling was that he was wearing half-sleeves and that too without any elbow protection unlike Duleep Trophy final last year. Earlier, India A were all out for 301 in their first innings after starting the day at overnight score of 221 for six.

While talented Tamil Nadu all-rounder Vijay Shankar (51) had an impressive ‘A’ team debut adding 62 runs for the seventh wicket with comeback man Amit Mishra (23), the last four wickets fell for a mere 18 runs as India A folded for 301 in 114.3 overs.

Shankar on his part was unbeaten on 51 off 135 balls with five fours and a six. For Australia ‘A’, Steve O’Keefe was the most successful bowler with figures of 6/82 in 31.3 overs. When Australia A batted, opener Cameron Bancroft (20) nicked one off Abhimanyu Mithun to Naman Ojha behind stumps. Skipper Usman Khawaja (25) and Travis Head (31) added an even 50 for the second wicket before Ojha ran through the top-order.

Head went as Mishra snapped him up off Ojha’s bowling. In the 24th over, Ojha got two wickets as Khawaja was holed out at deep mid-wicket to Abhinav Mukund while Nic Maddinson was caught by Karun Nair. However Handscomb played a patient unbeaten innings facing 137 balls in which he hit six fours. Stoinis, who had a contract with Delhi Daredevils during the last season of IPL, scored 42 off 87 balls with five fours and a six.

Having come together at the start of the 25th over, the duo played out 34 overs together. Mishra, who made a comeback to Test side, bowled 16 tight overs for 33 runs but didn’t get a wicket on the day. 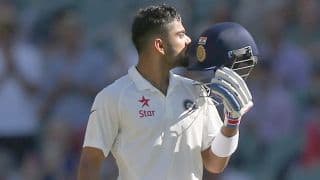 India vs Sri Lanka 2015 will be close, anticipates Virender Sehwag 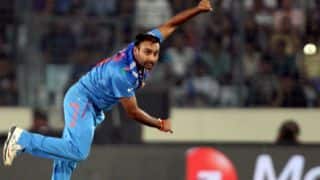