After an opening stand of 78, Australia A lost three wickets for 12 runs as Siraj ran through the batting

An unbeaten half-century to Usman Khawaja proved the backbone for Australia A s innings on the first morning of the first unofficial Test in Bengaluru, after Mitchell Marsh opted to bat. Leading the way for India A was pace bowler Mohammed Siraj, with all four wickets to fall, including those of Test players Peter Hanscomb and Marsh for ducks.

Australia A were given a good start by Khawaja and Test hopeful Kurtis Patterson, who put on 78 in 25.2 overs before the latter was bowled for 31 by Siraj. This triggered a collapse of three wickets for 12 runs. Next to go was Travis Head, caught behind for 4, before Siraj had both Hanscomb and Marsh lbw without scoring.

Khawaja, using all his Test experience, buckled down and ground his way to a vital half-century in the company for Marnus Labuschange.

First Published on
Last updated on September 2, 2018 12:59 PM IST
TOPICS:
India A Usman Khawaja Australia A India A vs Australia A Mohammed Siraj 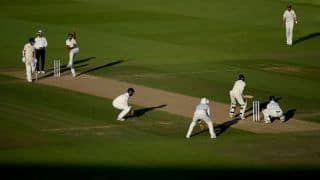 India vs England 2018, 4th Test, Day 4 LIVE Streaming: Teams, Time in IST and where to watch on TV and Online in India 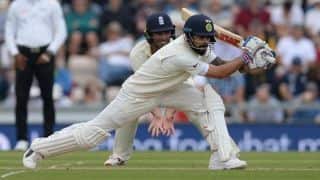