A spirited all-round performance from India A helped them beat visitors England by 53 runs in the first warm-up match against England at Palam A ground in New Delhi. 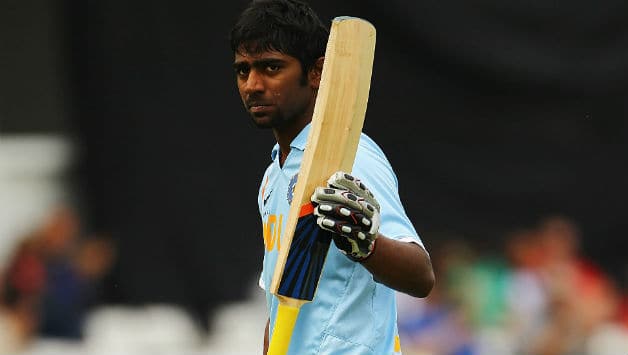 A spirited all-round performance from India A helped them beat visitors England by 53 runs in the first warm-up match against England at Palam A ground in New Delhi.

England captain Ian Bell won the toss and sent India A into bat in extremely cold conditions in New Delhi after the game was reduced to 39-overs-a-side. Openers Abhinav Mukund and Murali Vijay put on a 118-run stand for the first wicket before Mukund was dismissed after a well made 57. He was stumped off the bowling of James Treadwell.

Vijay was joined by Kedar Jadhav and the duo put on 32 runs for the second wicket. Vijay was clean bowled by Samit Patel after he top scored for the team with 76 runs.

Jadhav brought up the third half-century of the innings as India A posted 229 for four in 39 overs.

India discard S Sreesanth struck early with the ball as he sent back the dangerous Kevin Pietersen in the seventh over.

Captain Ian Bell scored a valiant 91 but didn’t have enough support at the other end as wickets kept tumbling at regular intervals as the visitors were left reeling at 72 for six.

There was some hope for the visitors as Tim Bresnan held fort from one end and put on a 44-run stand for the seventh wicket with his captain but Ashok Maneria sent him back and the momentum was back with India A.

There was another hint of a revival when Steven Finn and Bell put on 51 runs off just six overs for the ninth wicket but Mohit Sharma all but sealed for India A when he dismissed Bell for 91.

In the end, England fell short by 53 runs.

IPL and other domestic T20 leagues have to co-exist with the international calendar: ICC