Rain had the final say on Day 4 of the third and final unofficial Test between India A and New Zealand at the Cobham Oval in Whangarei on Monday with the contest ending in a draw.

“Frequent squalls passing over the ground meant the players were unable to take the field and the match was abandoned shortly after 2pm [local time],” New Zealand Cricket said in a media release.

India A remained on their overnight score of 38 for one in the second innings, still trailing NZ A by 37. After opting to bat first, India innings was powered by half-centuries from Vijay Shankar (71), Shubman Gill (62) and Abhimanyu Easwaran (56) as the were bowled out for 323 in 89 overs.

In reply the hosts scored 398-all out thanks to a century from Cam Fletcher (103) and half-centuries from Tim Seifert (86), Doug Bracewell (55) and Kyle Jamieson (53). They thus took a first-innings lead of 75 runs.

The two teams now begin their preparations for a three-match 50-over series to be played at Bay Oval on December 7, 9 and 11. 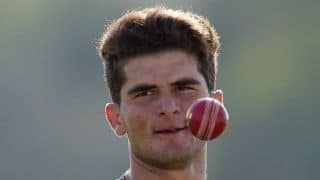