India A lost the plot after losing four wickets for three runs and squandered a chance to register their fourth successive win.

India A squandered a chance to register their fourth successive win as they lost the fourth unofficial ODI against South Africa A by four runs via D/L method at the Greenfield Stadium in Trivandrum on Thursday.

India had scored 56/1 from 7.1 overs in the chase of 193 before the rain on Wednesday had forced the match into the second day. The Shreyas Iyer-led unit was cruising towards a win at the end of 20th overs, having reached 161 for the loss of three wickets.

However, the team lost the plot, losing four wickets for three and were reduced to 164/7 as Shivam Dube, Iyer, Sanju Samson and Nitish Rana perishes in space of two overs. Anrich Nortjie and Lutho Sipamla ran through the Indian A middle-order to help South Africa A register their first win of the series.

Earlier, sent in to bat, South Africa A made 137 for one in 25 overs in a rain-affected game.

After play started late, heavy showers forced the players indoors with the visitors at 108/1 in 22 overs. The game was then reduced to a 25 overs-a-side affair and SA A added 29 more runs. The revised target for India A was 193 in 25 overs.

Heinrich Klaasen’s (21) late assault and Reeza Hendricks (60) helped the visiting team to finish with a flourish. The big-hitting Klaasen hit Ishan Porel for two consecutive sixes in the penultimate over and looked good for more.

However, Tushar Deshpande bowled a dream final over, with five consecutive dot balls to Klaasen.

Matthew Breetzke (25) and Hendricks provided a bright start, hitting some lovely shots. Breetzke hit a superb six over covers off Deshpande, which stood out. India A lead the five-match ODI series 3-1. 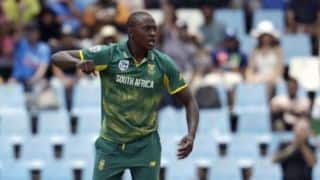