Left-arm spinner Nadeem then swung into action to further tilt it in India's favour as he cleaned up the middle order.

India A seized momentum in the unofficial first Test against the West Indies A with pacer Mohammed Siraj and spinner Shahbaz Nadeem reducing the hosts to 126 for five on the opening day in Antigua on Wednesday.

After winning the ODI series 4-1, India A extended their domination of the hosts to the Tests after they opted to bat at Sir Vivian Richards Stadium.

Siraj sent back both the openers Jeremy Solozano (9) and Montcin Hodge (16) in a confident start for India while his pace colleague Shivam Dube saw the back of rival skipper Shamarh Brooks (12).

Brooks was caught by wicket-keeper Wriddhiman Saha, who is playing his first competitive match after a long injury lay-off. Saha is also part of senior Indian Test squad, which will play a two-match series next month.

Left-arm spinner Nadeem then swung into action to further tilt it in India’s favour as he cleaned up the middle order.

Nadeem first dismissed Roston Chase (25), who was caught by Saha, and then clean bowled Jahmar Hamilton (16).

The hosts were reeling at 97 for five at that time but Rahkeem Cornwall (15 batting) and Jermaine Blackwood (29 batting) took the side past 100-run mark without more damage.

They have already added 29 runs for the sixth wicket but have almost one-and-a-half session to defy the Indian bowlers on the opening day of the four-day match. 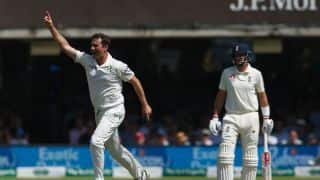