Five of six bowlers used by India A captain Hanuma Vihari took a wicket on day one of the second four-day unofficial Test match against West Indies A at Port of Spain, adding to a scratchy effort from the home team who ended on 243/5 after 90 overs.

As during the preceding one-day series and the first four-day match, several West Indies A batsmen got starts. Montcin Hodge batted 190 deliveries for his 65 and Shamarh Brooks made 53 from 98, but neither converted into a century. The home skipper Kraigg Brathwaite made 36 from 119 balls while putting on 87 in 39.1 overs for the opening wicket with Hodge, and the Test experience of Sunil Ambris and Jermaine Blackwood combined for just 32 runs as India A’s bowlers chipped away.

India A lead the three-match series 1-0. 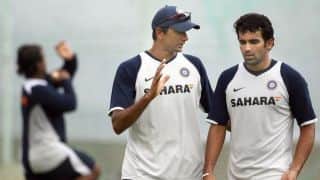