Catch live updates of the third unofficial One-Day International between India A and West India A at Bangalore on Thursday. 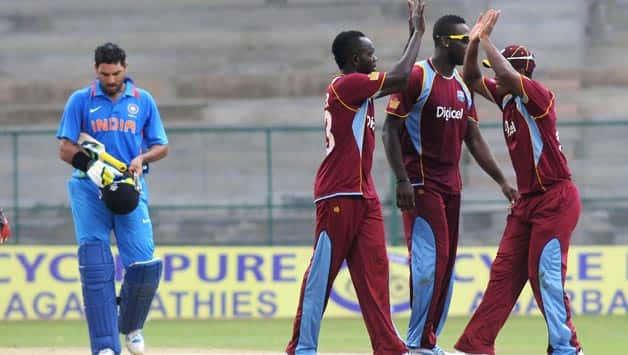 After Yuvraj Singh’s dismissal, India A were never in control of the chase © IANS

That’s it from the ODI series. CricketCountry will bring you live updates of the T20 match on Saturday and the three four-day match to follow it.

The India A team will be keen to introspect and present a much better perfromance in the upcoming games.

It’s 2-1 series win for West Indies A as they have defeated India A by 45 runs. The vistors played beautifully to register successive wins. India A were never in the match after Yuvraj Singh’s dismissal which was further jolted by the departure of Baba Aparajith.

Yuvraj Singh will be disappointed with the team’s performannce. Except for Yuvraj and to an extent Yusuf Pathan none of the other batsmen have appeared convncing.

Vinay Kumar displaying his batting skills to sustain the Indian innings but the high run-rate is now slowly making the chase irrelevant.

Yusuf Pathan yet again falls for a poor shot. After slogging a few deliveries, Miguel Cummins pitches it full and Pathan misses the ball completely only to see his off-stump flying. With no Mandeep Singh, Pathan’s dismissal is vituatlly curtains for the Indians.

After the departure of Aparajith and Yuvraj the Indians are slowly losing their way. Kedar Jadhav goes for a shot on the leg and the edge flies to the thirdman fielder.

Mandeep Singh won’t be batting in the innings as he injured his finger while attempting a catch earlier in the day.

One more down. Aparajith is foxed by Verrasammy Permaul to disturb the stumps. Permaul angles the ball in and the batsman is beaten by the low bounce. Two new men at the crease now — Kedar Jadhav and Yusuf Pathan.

Ashley Nurse finally rewarded with the wicket of Yuvraj Singh. The 112-run partnership comes to an end. A flatter delivery by Nurse saw Yuvraj rocking on to the backfoot and tries to place it towards covers but misses the ball.

Kedar Jadhav is new man in.

Great partnership between the two. Aparajith hits high over long-on where Andre Fletcher snaps the ball but crosses over the ropes. Perhaps Fletcher requires some Australian training for converting those tough chances into catches.

Both batsmen struggling for fitness. After Yuvraj’s treatment with the physio, Aparajith too required some medical attention for cramps. The running between the wickets has surely taken some beating due to the problem.

In the 22nd over, Yuvraj survived a close leg before call off Ashley Nurse but the umpire turned it down. Aparijith has shown great maturity in rotating the strike and ensuring the skipper has his way.

Yuvraj continues to keep up the pressure on the opposition bowlers and Baba Aparajith too has shown intent on playing his strokes freely. A fine partnership building between the two. Aparajith sensibly giving more strike to the man in form.

Trivia: It’s on this day Yuvraj Singh hit six sixes off Stuart Broad in the ICC T20 World Cup 2007. It’s a fine day for the skipper to script another victory.

Exquisite timing from Yuvraj Singh. Looking at the elegance of his batting, the West Indies A bowlers have a task on their hands. In the 14th over, Yuvraj’s flick flew over the air-borne long-on fielder. Aparajith playing well to hold on his wicket on the other end. Time for the young right-hander to increase the tempo.

Poor shot selection from Naman Ojha. No feet movement and tries to play away from his body and nicks it to the wicketkeeper.

Skipper Yuvraj SIngh walks in and Powell gets left-arm spinner Nikita Miller into the attack.

A disappointing end for Robin Uthappa yet again. A direct hit from mid-on fielder sees him fall just short of the crease. Crucial wicket for West Indies A considering Uthappa’s big-hitting skills.

Positive start from India A openers. Aparajith and Uthappa waiting for the loose balls and accumulating runs.

Welcome back. India A have a new opening pair in the form of Baba Aparajith joining Robin Uthappa. It’s a tough chase but the Indians will be keen to attack with Uthappa upfront.

Fine performance by West Indies A batsmen. It’s a challenging total. Jaydev Unadkat’s late strikes did pull back the the Windies total. Do catch our updates from the second innings. In the meanwhile you can read the innings report here.

Perfect slog overs bowling from Jaydev Unadkat. Gets Ashley Nurse and completes a fifer dismissing Kirk Edwards with a yorker. A fine innings by Edwards scoring 104 runs. His second List A hundred.

The ball takes the toe-end of Devon Thomas’s bat and flies high in the air. Unadkat runs across towards mid-on and takes a brilliant catch. Earlier in that over, a misunderstanding between Yuvraj Singh and Kedar Jadhav saw an easy catch being spilled.

Unadkat gets one more important wicket in the form of Andre Russell. A well disguised slower delivery from Unadkat which foxes the batsman. Russell tries to heave the ball on the leg side but misses it completely and the ball hits the stumps.

A fine innings by Leon Johnson and the 93-run partnership comes to an end. Tries to go after Unadkat and his mistimed shot is caught by Kedar Jadhav in the covers. Perfect stage for the explosive batsman Andre Russell to bat.

Vinay Kumar comes back into the attack.

Not the best of Powerplay, West Indies A would have preferred considering that they have two set batsmen on the crease. From the Windies point of view, they haven’t lost any wicket. This has been the hallmark of the West Indian batting. They have built their partnerships and taken calculated risks in increasing the tempo of the innings.

Kirk Edwards is increasing the tempo of the innings connecting some expansive shots into the stands. Yusuf Pathan has been expensive while Aparajith has conceded 16 runs in his fourth over.

Batting Poweplay signalled and the stage is set for the batsmen to free their arms.

Big breakthrough there for India A. Carter tries to sweep a ball past square-leg past off Baba Aparjith but slips while landing his front foot. The edge rolls on to the stumps.

Leon Johnson is the new man in and Yuvraj Singh brings Yusuf Pathan in to bowl.

Similar to the last match, West Indies A are focussing on the partnerships to build the innings. Carter and Edwards have been watchful and taking calculated risks to keep the scoreboard busy. The Indian bowlers need a breakthrough here. Carter is looking in fine touch along with Edwards who has shaped his innings with 27 from 44 balls.

Nadeem has certainly stemmed the flow of runs. Windies have completed 100 runs at a good run-rate. Carter the new man looks in good touch too. He was the man who tormented the bowlers in the second ODI. Despite two quick wickets, the batting side is still in control of the game. Siddarth Kaul brought back into the attack after he got a stick early on. Concedes just three in his over.

Shahbaz Nadeem gets one more. Superb bowling by the left-arm bowler. He has been accurate, earning some purchase from the wicket and gets his due. This time he bowls an arm ball and Fletcher misses it completely and the umpire has no hesitation in accepting that leg before appeal.

Drinks break taken after Fletchar’s dismissal and new man Carter plays it out watchfully. It’s a wicket and maiden over for Nadeem.

Finally a breakthrough for India. Shahbaz Nadeem dismisses Powell. The left-hander goes for a cut short but the ball takes the edge and flew to Robin Uthappa at slips who took a sharp catch. Nadeem has been impressive in his two overs so far.

Kirk Edwards is the new batsman joining Fletcher. And that’s the sixth bowler of the morning, skipper Yuvraj SIngh comes in to bowl.

Yuvraj has introduced spin from both ends with Shahbaz Nadeem and Yusuf Pathan. Nadeem on target in his first over.

Change of ends for Vinay Kumar as he replaces Unadkat. Powell continues to be aggressive and maybe he has hit the ball a bit hard. Umpires have called for a change of ball as it has lost its shape.

Both the opening bowlers are utilising the movement and bounce offered from the pitch. Fletcher has been tied down, but Kieran Powell is ensuring that the pressure doesn’t mount from his end as well. He goes for some aggressive strokes aided by some loose deliveries from Unadkat.

Yet again a disciplined start from opening bowlers Vinay Kumar and Jaydev Unadkat. Kumar bowled a maiden while Unadkat gave just two in his first over. Kumar, however, erred in line in his second over conceding a boundary in the form of leg byes.

India A captain Yuvraj Singh has won the toss and chosen to bowl in the third unofficial One-Day International (ODI) in Bangalore.

With the series tied 1-1, there’s a lot at stake in the final match. To recap, in the first unofficial One-Day International, a scintillating hundred from Yuvraj Singh set up a comfortable victory for Indians. In the second match another left-hander, Jonathan Carter struck a free-flowing ton to set a formidable total for the Indians to chase. This time around the India A team faltered and failed to get any partnership going and lost the match by 55 runs.

Hello and welcome to the live updates of the third unofficial One-Day International (ODI) between India A and West Indies A. This is Abhijit Banare and I will be bringing you the momentary updates of the final match.

Sanjay Patel: No discussion about India's tour of South Africa with Haroon Lorgat