The Indo-Pak cricket rivalry is one of the most intense among the famed rivalries in the world of sport and the same was witnessed today when the two teams squared off in the third and final one-dayer at the Feroze Shah Kotla stadium here. 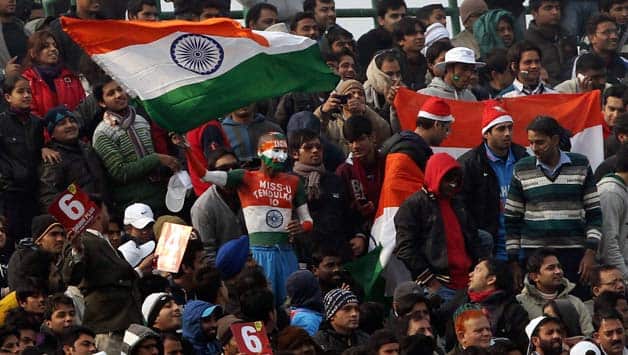 The Indo-Pak cricket rivalry is one of the most intense among the famed rivalries in the world of sport and the same was witnessed today when the two teams squared off in the third and final one-dayer at the Feroze Shah Kotla stadium.

Extreme fan reactions could be seen whenever a boundary was hit, wicket was scalped and fielders dived to save runs under chilly weather conditions.

A separate enclosure had been erected for the visiting Pakistani fans near Gate No 8. At the other side of the stand were Indian supporters.

A good 1,000 Pakistani supporters had turned up for the high-profile clash.

India-Pakistan cricket matches have always offered opportunities for cricket diplomacy as a means to improve relations between the two countries by allowing the fans from either country to travel to the other to watch the matches.

“I am so happy that the bilateral ties between the two countries have resumed. They should play each other on a regular basis,” said ‘Chacha Cricket’.

“This is my fourth visit to the city. Earlier I used to stay at a friend’s place but this time I am staying in a hotel suggested by the BCCI. The atmosphere is completely electrifying and crowd support is amazing. I feel like at home. It’s very similar to Lahore. The food, people and weather everything is similar to Lahore,” he added.

Another Pakistani supporter, Qaisar Ali from Lahore seemed happy with the arrangements made by the Indian government for the visiting fans and said such series will help in normalising the ties between the two nations.

Meanwhile, the beefed up security did not deter black marketeers from having a field day outside the Kotla stadium.

The touts went about their business selling tickets illegally for more than double their price.

Despite the match being inconsequential with Pakistan taking an unassailable 2-0 lead in the three-match series, cricket fans turned up in large numbers to watch the rivalry unfolding in front of their eyes.

Those, who missed out on a chance to buy tickets, obliged the touts by purchasing the tickets for the cheaper stands.

Cricket lovers, who purchased the genuine tickets when bookings had opened for the high-profile clash, helplessly watched the spectacle of the blackies ruling the roost.