India posted a historic win against England in the final Test of the Anthony de Mello Trophy. They picked up 10 wickets in the last 2 sessions to win by an innings and 75 runs at the MA Chidambaram Stadium, Chepauk, Chennai to clinch the series 4-0.

India posted a historic win against England in the final Test of the Anthony de Mello Trophy. They picked up 10 wickets in the last 2 sessions to win by an innings and 75 runs at the MA Chidambaram Stadium, Chepauk, Chennai to clinch the series 4-0. With this victory, India have defeated England in a series after 8 years. They had last lost 0-1 in the 2008-09 tour of India. India also became the first Asian country and fourth team overall (after West Indies, Australia and South Africa) to defeat England with a 4-0. This is India s second victory in a Test series by a 4-0 margin, after the Border-Gavaskar Trophy 2012-13. Virat Kohli s India also set a new record by remaining undefeated for 18 consecutive Tests, going past the previous record of 17 created during Kapil Dev s tenure from 1985 to 1987.

England, requiring 282 to make India bat again, had polished off 12 runs on the fourth evening. Alastair Cook and Keaton Jennings saw things off on the fourth evening and batted till lunch on Day Five. Immediately after lunch, however, Cook attempted a needless stroke to one from Jadeja that was clearly going down leg, and edged one to KL Rahul at leg-slip. It was the sixth time in 5 Tests that Jadeja got the better of Cook.

Jennings went next, beaten in the flight by Jadeja and lobbing one back to him. Joe Root attempted a sweep and missed; the appeal was turned down, but Kohli reviewed, and the decision was overturned. Jadeja accounted for the fourth wicket as well when he took an outstanding catch running backwards when Jonny Bairstow tried to slog Ishant Sharma towards leg. England reached 167 for 4 at tea.

India maintained their dominance by dismissing Moeen Ali soon after tea. For some mysterious reason, Moeen tried to loft Jadeja over mid-on. Ashwin leapt up in the air and took a brilliant catch. A couple of overs later Jadeja got Ben Stokes, whose mistimed flick lobbed harmlessly to mid-wicket. It was the sixth five-wicket haul for Jadeja.

Amit Mishra got his first wicket of the match as he bowled Liam Dawson with a googly. Dawson, who had scored a fifty in his maiden Test innings, perished for a duck. The googly found the gap between bat and pad to undo the furniture. It was the only wicket of the scorecard that did not feature Jadeja.

Jos Buttler and Adil Rashid were England s last hopes left. While Rashid had scored a half-century in the first innings, Buttler had stood firm when England had collapsed in the second innings at Mumbai.

India took the new ball in the 81st over and tasted immediate success. Rashid, attempting to flick Umesh Yadav, could only top-edge it to Jadeja at cover-point.

India went for the kill thereafter. They even took a bizarre call for review when the Stuart Broad was hit on the pad by Ashwin: the ball probably missed the stump by a mile!

But Broad did not last. A ball from Jadeja kissed Broad s gloves and Cheteshwar Pujara took an easy catch at short-leg. Broad rarely walks, and he stayed put this time as well, and only returned after the umpire gave a delayed dismissal. Three balls later Nair caught Jake Ball to end England s misery. Jadeja finished with career-best innings (7 for 48) and match (10 for 154) hauls, but more importantly, turned a certain draw into a victory for India despite the fact that Ashwin did not pick up a wicket in the second innings and only 1 in the first. While the first 13 sessions had produced a mere 17 wickets, the last two accounted for 10.

England had a decent start to the match, putting up a formidable 477 in their first innings and batting till the sixth session of the Test. At that stage an English defeat barely seemed possible. England had lost Cook and Jennings early, but Root (88) and Moeen (146) had come to their help again. Bairstow had contributed with 49 as well, while Dawson and Rashid, both of whom had scored in excess of 60, added 108 runs for the eighth wicket. Ishant and Umesh had picked up 2 wickets apiece, but it was really Jadeja s probing bowling that England had any kind of problem with.

At this stage England had no clue about the hammering that was about to take place.

Parthiv filled in at the top for an injured Vijay. Parthiv (71) added 152 for the opening stand with Rahul. Neither Pujara nor Kohli, India s two in-form batsmen, lasted, and England probably sniffed a chance at 211 for 3. At that stage Nair joined Rahul, and just like the Ranji Trophy final of 2014-15, they put up a massive partnership.

Rahul was unfortunate to fall for 199 while Vijay played a cameo, and once again India s formidable lower middle-order stepped up to the challenge. Nair went from strengths to strengths, playing some delectable strokes and running extremely hard in the sweltering heat; he found support in both Ashwin (67) and Jadeja (51), who helped him add 181 and 138 for the next two stands.

Kohli had almost certainly wanted his batsmen to get on with it in the third session of Day Four, but Nair scored so quickly that he had to postpone his declaration. Nair eventually became the second Indian to slam a Test triple-hundred; Kohli declared immediately after he brought up the milestone.

Man of the Match: Karun Nair.

Man of the Series: Virat Kohli. 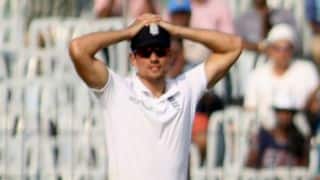