Seamer R Vinay Kumar returned with a three-wicket haul as India recorded yet another victory in a practice match, inflicting a narrow 15-run defeat on Leicestershire in a Twenty20 fixture at Grace Road on Monday. 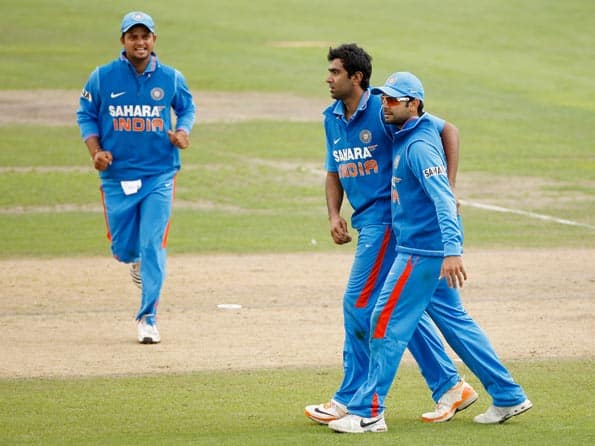 Seamer R Vinay Kumar returned with a three-wicket haul as India recorded yet another victory in a practice match, inflicting a narrow 15-run defeat on Leicestershire in a Twenty20 fixture at Grace Road on Monday.

The visitors rattled up 161 for five after being put in to bat and bowled with discipline to restrict the domestic T20 champions to 146 for seven in the stipulated 20 overs.

This is India’s third successive win in practice games, before heading to a one-off Twenty20 and five one-day internationals from here on.

Vinay Kumar was the hero of India’s win, bowling his four overs for only 29 runs and picking up three smart wickets to bog down the local team.

Indians made their runs collectively with openers Parthiv Patel (40) and Ajinkya Rahane (19) giving a good start of 52 runs from 5.4 overs and later Rohit Sharma (29) and Suresh Raina (21) providing a good flourish in the end.

In between Rahul Dravid contributed 29 but his attempts at slogging didn’t go with his elegant batting style.

Leicestershire lost an early wicket to Praveen Kumar but then Andrew McDonald (44) and Will Jefferson (20) appeared threatening for a while.

However Vinay Kumar bowled an excellent spell in middle overs and two spinners, Amit Mishra and Ravichandran Ashwin, were excellent foils as Indians tightened the screws.

Some late hitting by Abdul Razzaq brought the equation to 43 off the last three overs.

Praveen Kumar, who had bowled his first three overs for 16 runs, went for 10 runs from his final over as Leicester required 33 from the final two overs.

However, Razzaq was caught in the deep in the penultimate over bowled by Ashwin. The Pakistani allrounder made 37 off 24 balls with the help of five fours.

Ashwin conceded only eight runs from this over to make it 25 from the final over, still a difficult task for the hosts.

Vinay Kumar then bowled the final over and conceded only nine runs besides picking up the wicket of Jacques du Toit (13) to clinch the game for the Indians.

Earlier, openers Parthiv and Rahane made 52 from 5.4 overs to give India a flying start.

Patel cut Matthew Hoggard over slips in the very first over and hoisted Abdul Razzaq over mid-on. He then cracked Hoggard through covers and lofted Razzaq over his head.

Rahane, on the other hand, favoured onside for his early strokes, flicking Hoggard to fine leg and then driving Razzaq to midwicket fence. The best shot of the stand though was when he drove Hoggard for boundary at the extra cover.

Rahane, however, departed in the sixth over when he gave a charge to Razzaq and Jigar Naik at short third man held a fine catch. Soon India lost its second opener also when Parthiv holed medium-pacer Andrew McDonald to deep midwicket.

The innings then got bogged down as slower bowlers came into operation and the slow nature of the wicket defeated the attacking instincts of the Indian batsmen.

Both Virat Kohli (13) and Dravid (29), the number three and four batsmen at the crease, departed by holing out to fielders in the deep.

Rohit (29) then smacked two successive sixes to power Indians past 150. Raina (21), skippering in this match, also hit some cracking blows in the end.

Rookie fast bowler Varun Aaron played his first match on the tour but he was expensive, conceding 34 runs in his three overs.