Deepak Hooda was the architect of India's win over Sri Lanka.

India colts salvaged some pride as they comfortably beat their Sri Lankan counterparts by 76 runs in a fifth-place play-off semi-final match at the ICC U-19 World Cup on Monday.

In absence of skipper Vijay Zol, who was banned for breaching International Cricket Council‘s (ICC) Code of Conduct, the Sanju Samson led side piled up 291 for seven in the stipulated 50 overs at the ICC Cricket Academy ground in Dubai.

Deepak Hooda starred with an all-round performance of an unbeaten 76 off 57 balls with the bat and 3 for 31 in 10 overs with his off-breaks.

Earlier, Akhil Herwadkar (23) and Ankush Bains (29) added 57 runs for the opening stand, while Iyer and Samson added 87 runs for the third wicket stand.

Sri Lanka were never in the game as only opener Sadeera Samarawickrama (58) and Priyamal Perera (47) made notable contributions as Hooda and left-arm orthodox Karan Kalia (2 for 39) snared five wickets between them for only 70 runs in 20 overs.

Left-arm chinaman Yadav was expensive, but in the end got a couple of wickets. 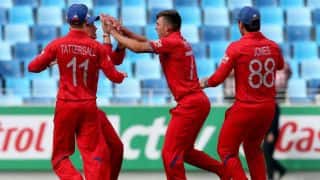 England vs Pakistan Under-19 World Cup semi-final: Pakistan 103/4 in 27 overs 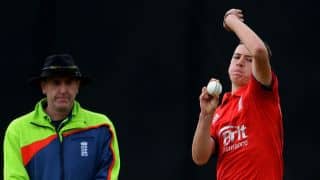