India have made it four wins in four games after beating West Indies at WACA, Perth.

Perth: India registered their fourth consecutive victory by beating the West Indies by four wickets in their ICC Cricket World Cup 2015 clash at WACA, Perth. Batting first, West Indies were bowled out for 182. India huffed and puffed but got their with four wickets in hand with over 10 overs to spare. India maintain their top spot in the Group B of the ICC Cricket World Cup 2015. They are looking good to maintain the lead, while West Indies head to New Zealand to play United Arab Emirates in a crucial game, where net run rates could possibly come into play. Live Updates: India vs West Indies

The WACA wicket was expected to have bounce, but the first 10 overs would have surprised many. Mohammed Shami and Umesh Yadav looked almost unplayable, bowling deliveries that went through to MS Dhoni at a very good height. Chris Gayle and Dwayne Smith had a tough time in the middle, with the deliveries zooming past them. FULL SCORECARD: India vs West Indies

However, the Indian pace attack rattled the top order reducing them to 31 for four inside the first ten overs. Gayle had a charmed life as he survived three attempts, but was finally dismissed when Shami had him caught in the deep. West Indies had to struggle through the innings as the spinners only went on to build the pressure. ICC Cricket World Cup 2015: POINTS TABLE

West Indies also played a few poor shots. Lendl Simmons and Jonathan Carter found the men in the deep perfectly. Darren Sammy survived a chance when he skied one. Andre Russell hit one straight to long-on. But, Sammy fought during his innings of 26 and Jason Holder batted beautifully during his fighting fifty. He essayed some big hits down the ground and ensured the West Indies got to a respectable score. ICC Cricket World Cup 2015: SCHEDULE & MATCH DETAILS

At one stage, West Indies were looking good only for a score around 120. Holder’s innings provided a boost that took them past 180, which made it a competitive score, given the conditions. India had to work hard for their runs as the West Indies bowlers gave their opponents a taste of their own medicine. Top 10 batsmen in ICC Cricket World Cup 2015

West Indies bowlers were attacking as they kept targeting the Indians with the short ball. They also bowled probing lines around off-stump, which resulted in the openers’ dismissals. Virat Kohli and Ajinkya Rahane brought some stability to the proceedings. Kohli was calm during his innings of 33, but he fell to the short ball as he pulled one to square-leg. Rahane was then given out caught behind when Kemar Roach got one to tear through him. The Snickometer showed a deflection, but the question was whether it was that of the ball touching the bat. At 78 for four in the 18th over, things looked a little dicey. Top 10 bowlers in ICC Cricket World Cup 2015

Enter MS Dhoni, who gutted it out and held India together till the end. Suresh Raina essayed a cameo and Ravindra Jadeja did not last long, but Dhoni kept a cool head and finished the game with Ravichandran Ashwin. ICC Cricket World Cup 2015: Complete Coverage 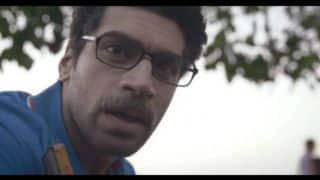