India’s batting woes continued as they were bundled out for 202 on Day Three of the first Test against New Zealand at Auckland on Saturday. The Indians have conceded a 301-run lead but skipper Brendon McCullum decided against enforcing follow-on.

India resumed the day on 130 for four with Rohit Sharma and Ajinkya Rahane settled in witha  79-run partnership. They were cautious at the start. The pacers got the ball to swing. It was Tim Southee who got the first wicket of the day removing Rahane for 26. MS Dhoni was tested by Southee but it was Rohit whose lapse in concentration saw him getting bowled by Trent Boult for 72. Dhoni hung on for a while with Ravindra Jadeja before he edged Neil Wagner behind the wickets for 10.

The landslide had begun with the tailenders hardly sustaining against the pacers. Zaheer Khan hit a few big shots before he was removed by Wagner for 14. Ishant Sharma too departed trying to go for a big shot. Jadeja later hit a boundary and a six before No 11 batsman, Mohammad Shami was dismissed.

India had begun their innings on Day Two when they bowled out New Zealand for 503. They were already pushed to the backfoot losing three wickets for just 15 runs. Two of the three wickets fell in the first over itself when Trent Boult sent back Cheteshwar Pujara and Shikhar Dhawan. Even Virat Kohli didn’t last long when a nasty bouncer from Tim Southee clipped his elbow and deflected from the helmet to the slips.

India went in to tea at 45 for three but post the break Murali Vijay was bowled by an excellent incoming delivery from Wagner for 26. 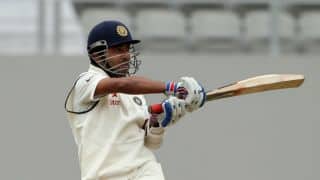 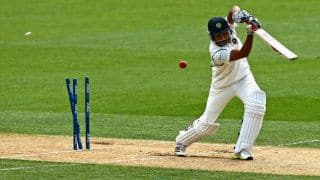