Fielding coach R Sridhar will have his nose ahead despite South African star Jonty Rhodes throwing his hat in the ring for the role.

India‘s current bowling coach Bharat Arun is likely to retain his position even if there are multiple candidates while R Sridhar will have his nose ahead despite South African star Jonty Rhodes throwing his hat in the ring for the fielding coach’s position.

But batting coach Sanjay Bangar might find it difficult to retain his position when the national selectors pick the support staff for the Indian team.

All three have got extension along with head coach Ravi Shastri till the end of the upcoming tour of the West Indies and after that, fresh interviews will be conducted with all the incumbents automatically in fray.

As per norms, while the new Cricket Advisory Committee — likely to be chaired by Kapil Dev — will decide on the head coach, the selectors have been tasked to conduct interviews for the rest of the support staff.

If those privy to the developments are to be believed, Arun could turn out to be a unanimous choice considering the performance of India’s pacers in all formats of the game.

“In the last 18 to 20 months, the work put in by Arun has been phenomenal. The current Indian attack is considered to be the best in the longest format. Mohammed Shami back at his best and (Jasprit) Bumrah’s consistency are a few things Arun must get credit for. It’s up to the selectors but they might find it difficult to replace him,” a senior BCCI official told PTI on Friday.

However, same can’t be said about Bangar, who many believe hasn’t been able to create a solid middle order despite four years in the job.

“Virat Kohli and Rohit Sharma have been performing much before Bangar came into the fray. He has no role in their success. However, his job was to create a few solid options in the middle order and we have seen in the World Cup that he has failed miserably in that,” the official added.

ALSO READ: Virat Kohli not to have any say in coach’s selection

There have been reports that it was on Bangar’s insistence that Mahendra Singh Dhoni was asked to bat at No.7 in the lost semifinal against the New Zealand, a decision that has been roundly criticised.

While Arun is the favourite among three specialist coaches, Sridhar is also not far behind as India has made rapid strides in the fielding department.

But he will get a tough fight from Rhodes, who is set to get an opportunity to give a presentation to the selection committee.

“Rhodes is a big name and his candidature can’t be ignored. However, this also needs to be taken into account that how the team’s fielding performance has been,” the official said. 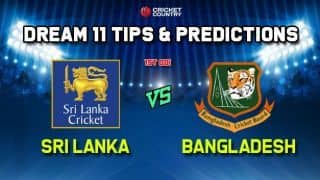