Jemimah s innings of 37 was decorated with 5 fours and 1 six.

India Women had never played a T20I in South Africa before this series. The teams faced off for the second time at the international level. The only time these sides played a T20I was in 2014. India had won the game by 16 runs, at Bengaluru. India, playing a T20I after 436 days, welcomed it with a win. They beat South Africa in the first T20I by 7 wickets at Senwes Park in Potchefstroom. It was this venue where India were denied an ODI whitewash over South Africa on Saturday. With this win India have taken 1-0 lead in the five-match T20I series.

Go was the word for the India from ball one. Smriti Mandhana and Mithali Raj went all guns blazing. The first over, from Marizanne Kapp, saw 20 runs being scored 4 4 6 wide 4. Smriti came to her elements and smashed Shabnim Ismail for 2 sixes and a four with 17 runs coming from her over. Then Moseline Daniels answered Dane van Niekerk s call: Smriti was pouched by Dane herself at extra cover for 26. Harmanpreet Kaur was caught in a horrible mix-up with Mithali and was sent back the next ball.

At this stage India Women seemed to be in trouble, but in came the 17-year old Jemimah Rodrigues. She looked unfettered on debut so much so that she reduced Mithali to a mere spectator. Jemimah s 37 included 5 fours and a six. She also dominated a 69-run stand with Mithali before mistiming a sweep that Raisibe Ntozakhe took comfortably at fine leg. She ended her innings with a strike rate of 137.

The equation was 42 off 36 at this point. A confident Veda Krishnamurthy cut loose almost immediately upon arrival. Mithali played second fiddle for a while before joining in the charge. Mithali slammed her fifty from 45 balls and was named Player of the Match. However, it was Veda who finished it off in style for India with 7 balls to spare. Veda and Mithali remained unbeaten on 37 and 54 respectively.

South Africa had nothing going their way. Their lengths went wrong and were sloppy on the field, and they lost control once Smriti had got going. Moseline and Dane were the only bowlers kept India on backfoot. They also ended with a wicket apiece.

Earlier, South Africa batters provided blistering start. Dane and Lizelle Lee, who hold the reputation of scoring big, did exactly that from the start. Shikha Pandey, who had starred in India s first ODI win against South Africa on the tour, leaked 11 runs from her first over. The Indian bowlers initially bowled wide and short to the openers that paved way for the South Africa batters.

It was Shikha who ended a growing partnership between Dane and Lee. South Africa were 1 down at 30. Gaining confidence, Shikha took a blinder at deep cover to dismiss Sune Luus for 18. An unfazed Dane kept piling the pressure on India Women.

Anuja Patil the second-best bowler for India Women today. She trapped Dane for 38. Despite the bowlers bouncing back, unfortunately, the fielding looked haywire. Mignon du Preez was given two lives: a missed run-out opportunity and a catch dropped by Pooja Vastrakar. Mignon and debutant Nadine De Klerk took over the game for India for a brief period, adding 46 on board. India, finally, managed to grab hold of Mignon, for 31, courtesy Anuja.

The final 3 overs belonged to Chloe Tryon who caused the major damage. Her quickfire 7-ball 32 not out included 2 fours and 4 sixes that took South Africa to an advantageous score of 164.

Player of the match: Mithali Raj. 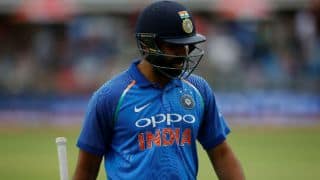