Former India captain Chandu Borde said India has such an abundance of cricket talent today that it can easily field two national squads of equal strength. 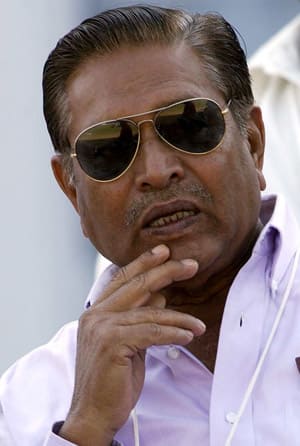 Former captain Chandu Borde said India has such an abundance of cricket talent today that it can easily field two national squads of equal strength.

“We have so much talent in our country today that we can easily field two teams,” Borde said while inaugurating a cricket academy named after him at a school here.

“Indian cricket has a very bright future,” he added.

The Chandu Borde Global Cricket Academy at the Global Indian International School (GIIS) campus in Noida is the third such in the GIIS network in India, the other two being in the GIIS campuses in Indore and Surat.

According to Borde, fielding is one area where Indian players have improved vastly.

“In our days we did not have anybody training us specifically in fielding,” the veteran of 55 Test matches, who was known for his fielding skills during his playing days, said.

“Nowadays with support staff training players specifically in fielding, our players are living up to their standards,” he said.

Former Indian Test opening batsman Chetan Chauhan, who was the guest of honour at the inauguration, said the Indian Premier League (IPL) too had helped improve the fielding of the Indian players.

“Nobody today hesitates to dive, take a tumble, attack the ball while fielding,” he said.

Asked whether selecting an India team is easier today given the talent, Borde, who has served as the chairman of the national selection committee twice, said that the the job of the selectors during his time and now remained the same.

“However, players nowadays get more opportunities to showcase their talent because of the league system in the Ranji trophy. In our days, it was knockout format, not many players could get more than one opportunity prove themselves,” he said.

According to him, the academies like the one he inaugurated Saturday are also helping in grooming young talent in the country.

“During our days, we used to play on the school grounds. But nowadays, because of the ascent on construction of buildings, very few schools have big sports grounds,” Borde said.

“That is where the academies come in to help in spotting and grooming young talent. It is good that many former cricketers, including Ranji [Trophy] players, are associated with schools and colleges in one way or the other to develop the game,” he remarked.

Chauhan, who is also vice-president of the Delhi and Districts Cricket Association (DDCA), said the infusion of big money in cricket today helped spread the game to far-flung areas of the country.

“Why just BCCI, all sports bodies in the country should be brought under the RTI. After all, these bodies are run with public funds. But then, that is my personal view and not that of the DDCA,” he said.