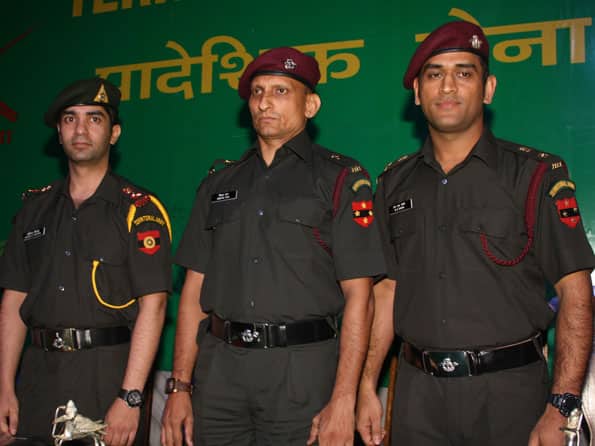 President Pratibha Patil had approved the grant of honorary commissions to the two illustrious sportspersons on Sep 13 in recognition of their achievements in their respective sports.

Bindra won the only individual Olympic gold medal for India at the 2008 Beijing Olympics.

Along with the two sportsmen, the army also honoured Deepak Rao, a medical doctor by qualification but a martial arts specialist by choice, who got about 15,000 of the army troops trained in close quarter combat, with the rank of a Major.

While Dhoni and Deepak Rao were commissioned into the elite Para Regiment in the presence of the Colonel of the Regiment, Lt. Gen. Vinod Bhatia, Bindra was welcomed into the Sikh Regiment by Lt. Gen. Sumer Singh, its Colonel of teh Regiment.

“I have got the maroon beret now, but I have to earn it,” Dhoni said soon after, pointing out that becoming a member of the elite Parachute Regiment was not child’s play and involved rigorous combat and airborne operations training.

“I will soon find time to go for my training, will meet with the soldiers on the borders and encourage youth to join the army,” said Dhoni, who has earlier interacted with army personnel during visits to cantonments. He was asked by his wife Sakshi, how he would contribute to the army.

“Joining the Territorial Army and donning this uniform is a childhood dream come true for me,” he added.

On his choice of the Para Regiment, the cricketer said he wanted to be part of a regiment that had members from all over the country and from all regiments of the Indian Army, and hence the choice narrowed down to the Para Regiment.

Bindra, his usual humble self, said his interaction with the army was relatively new and hence he would learn more now that he is donning the Olive Green uniform.

Rao, who has Annaji as his middle name, has been training all the elite forces of the country, including the National Security Guard, for 18 years now, having developed his own unique style of close quarter combat.

Asked how he would contribute, Rao said he had only trained 15,000 soldiers till date, but the armed forces were 14 lakh strong. “I have many more years to go,” he said.

The two sports personalities and the martial arts expert joined an exclusive group of personalities, including senior cricketers Kapil Dev and Sachin Tendulkar, who have been conferred honorary ranks in the armed forces.

Kapil Dev was conferred the honorary Lt. Col. rank in the Territorial Army in 2008, while Tendulkar was made honorary Group Captain in the Indian Air Force (IAF) in 2010. (IANS)