The third Test between India and Sri Lanka that concluded this week attracted controversies due to Delhi pollution.

After bagging the Test series 1-0, India and Sri Lanka will begin their limited-overs combat one that will involve 3 ODIs and 3 T20Is. The series will start with the first ODI at Dharamsala. The third Test between India and Sri Lanka had concluded this week attracted controversies due to Delhi pollution. The Sri Lankan cricketers had complained of breathing difficulties and play had to be halted on Day Two. As the Sri Lankans were losing players to illness due to high pollution levels, their counterparts were fine with continuing the play. Ravi Shastri had stepped on the field during the course of play to communicate his displeasure to the umpires.

Ahead of the Dharamsala ODI, Shastri possibly took a dig at the Sri Lankan camp with his tweet. He posted a picture of the scenic hill station and wrote “Breathe easy in Dharamsala #TeamIndia #INDvSL”.

Indian team officials were clearly not happy with Sri Lanka’s reluctance to continue playing amidst Delhi smog. A frustrated Virat Kohli had even declared the Indian first innings well ahead of what he would have liked in order to get the game moving.

Shastri may not be completely right with his tweet. Dharamsala is around 1,500 meters above sea level. Though the AQI (Air Quality Index) at the Dharamsala is many times better than that of Delhi, the higher altitude does cause breathing problems and therefore it won’t really be easy. Also, given his stature, Shastri should perhaps have refrained from comments that stirs unnecessary controversies.

Sri Lanka’s reluctance to field in the first innings of Delhi Test is debatable considering their willingness to bat in similar conditions but ICC are taking the issue seriously and very soon, we may have set pollution-level parameters for a play to commence. 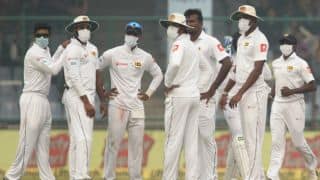