There is talk of BCCI considering an Indian for the job of the national team's coach.

With the termination of Duncan Fletcher‘s position as India coach, discussion in regards to potential candidates for the job are set to dominate proceedings of the Board of Control for Cricket India (BCCI) working committee meeting on March 26, Sunday. This will mark the first working committee meeting of the BCCI under the rule of Jagmohan Dalmiya.

The meeting will be held at Kolkata and finding a replacement for Fletcher will take top priority in the proceedings. The position in question is one of the most prestigious and lucrative in cricket circles, according to ibnlive.in.com.

In build up to the meeting, various names have cropped up to take up the role. There is talk of BCCI considering an Indian coach for the job after assigning foreigners to the role for over a decade. India have seen foreigners like John Wright from New Zealand, Australian Greg Chappell, South African Gary Kirsten and finally Duncan Fletcher from Zimbabwe  take up the prized position.

The Indian cricket side, though continues to remain a formidable force in limited overs cricket, have struggled in Test matches abroad having lost 15 of their overseas Tests in the last four years. Rectifying that record will be on top of minds when zeroing in on coaching candidates.

Apparently big Indian names like Rahul Dravid and Sourav Ganguly have cropped as potential candidates to ascend to the role. Part of the reason they have been talked about for the role is that, both have tasted success in overseas Test matches as captain of India in their playing days.

Other Indian names being considered include Ravi Shastri who is presently India’s team director, Sanjay Bangar, Bharat Arun and R Sridhar. The possibility of BCCI appointing another overseas coach can’t be written off and Stephen Fleming and Michael Hussey are on the radar to take up the position. 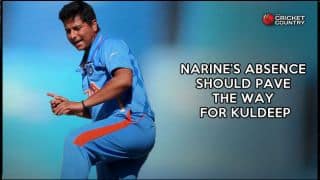