The Maharashtra ATS has arrested a man who allegedly threatened to kill Indian cricketers, an official said on Thursday.

The Maharashtra ATS has arrested and brought to Mumbai from Assam a man who allegedly threatened to kill Indian cricketers, an official said on Thursday.

A local court has sent him to police custody till August 26.

The accused, identified as Braja Mohan Das, was arrested on Tuesday from his home in Shantipur village in Assam’s Morigaon district, around 80 km from Guwahati, and brought to Mumbai for investigations.

Das had on, August 16, allegedly sent the threat in an email to the Board of Control for Cricket in India (BCCI).

The BCCI informed the Mumbai Police and the ATS launched an investigation and tracked the location of Das. An ATS team then rushed to Assam and nabbed him with the help of the local police, said the official.

After securing transit remand from the Chief Judicial Magistrate, Morigaon, Das was brought to Mumbai and produced before the Mazagaon Magistrate 2nd Court which sent him to police custody for five days.

The ATS has seized some electronic equipment from the accused and booked him under various sections of Indian Penal Code.

The BCCI has not issued any statement in this regard so far and the Indian cricket team is currently on a tour of the West Indies for playing various matches. 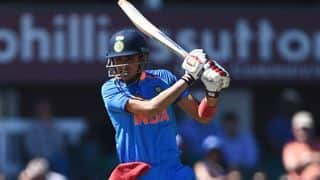