Veteran batsman Yuvraj Singh has announced his retirement from international cricket on Monday.

“Only if I could articulate what Cricket has done for me, to me! But let me tell you this, Cricket has given me everything I have and it is the reason why I sit here today,” an emotional Yuvraj said during a media interaction in Mumbai on Monday.

Yuvraj Singh: 12 facts you should know

Yuvraj, who last played for India in June 2017 in an ODI against West Indies, had been contemplating bringing down curtains on a highly successful international career for some time. During his 19-year stint in international cricket, he won two World Cups the inaugural ICC World T20 in 2007 and then ODI World Cup in 2011.

The 37-year-old Yuvraj was the man-of-the-tournament as India lifted the 50-over World Cup for the second time becoming the first team to do so at home beating Sri Lanka in final at the Wankhede Stadium.

Having made his India debut at the tender age of 18 during the 2000 ICC KnockOut tournament in Kenya, Yuvraj announced himself with a match-winning 84 against Australia in the quarter-final clash in only his second ODI.

While Yuvraj established himself as a middle-order mainstay in India’s middle-order setup, he failed to emulate it in the longest format.

In 40 Tests, after debuting in October 2003, he scored 1900 runs at 33.92 with three centuries and 11 fifties. In 58 T20Is, he hit 1177 runs with eight half-centuries with his six sixes in an over of England pacer Stuart Broad during the inaugural World T20 remaining one of his most memorable innings. 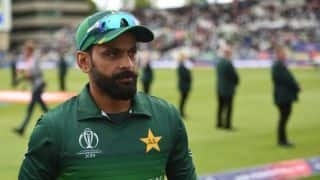