Ajinkya Rahane (50) made most of his opportunity while Shikhar Dhawan (41) marked a positive return to the side after sitting out in the previous match as India registered a comprehensive seven-wicket win over Zimbabwe to complete a 5-0 whitewash, their first away from home, in Bulawayo.

India won by 7 wkts
Man of the Match: Amit Mishra 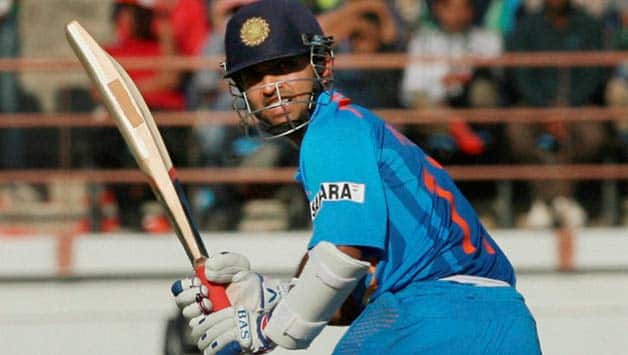 Ajinkya Rahane (50) made most of his opportunity while Shikhar Dhawan (41) marked a positive return to the side after sitting out in the previous match as India registered a comprehensive seven-wicket win over Zimbabwe to complete a 5-0 whitewash, their first away from home, in Bulawayo.

After Amit Mishra’s six wickets stunned the hosts, the Indian batsmen were hardly tested in their chase of a paltry 164.

Zimbabwe started well with the ball when a delivery from Kyle Jarvis went through Cheteshwar Pujara‘s defense to rattle the stumps. This was the second time in as many games when a huge bat-pad gap has led to Pujara’s early wicket. He had to walk back for nought in the very first over.

Rahane, who came in place of Ambati Rayudu, started cautiously while Dhawan showcased his boisterous side once again. He looked to unsettle the Zimbabwe bowlers early on. He started by dispatching an half-volley from Jarvis, to the extra-cover boundary and followed it up with three fours in the next over from Brian Vitori. First up, Vitori offered a length delivery outside the off-stump for Dhawan to square cut it to the fence.

Then, there was a delivery that was angled in to the left-hander and was slanting towards his leg-side. Dhawan went back and pulled it behind square. Vitori, who by now was down on morale and confidence, fired another delivery down the leg side and Dhawan just helped it to the fine-leg boundary.

In the following over, Rahane got into the act when he beautifully guided a straight delivery down to the fine-leg fence for a four. Dhawan’s murderous mood was not to die down soon, as he slammed a six over deep midwicket boundary and followed it up with a well-timed punch off the backfoot through the covers. To make matters worse for Vitori, Dhawan was dropped in the following delivery when a top-edge went high in the air but had no definite takers when it came down. Keeper Brendon Taylor made an outstretched diving effort but couldn’t latch on to the ball.

The duo continued to play their shots and added 55 runs for the second wicket before Dhawan gave Jarvis his second wicket of the match.

Virat Kohli sent in Ravindra Jadeja next and the latter joined Rahane in the middle. This duo set about wiping the deficit that was soon down to double figures. The duo added 71 runs for the third wicket, a partnership during which Rahane brought up his half-century. However, soon after raising his bat to the audience, Rahane had to walk back to the pavilion. He opted to go on the backfoot for a  full delivery from part-timer Malcolm Waller and was beaten. The ball spun well to go on to hit the stumps. At this stage India were at 126 for three in the 28th over. Rahane’s 66-ball half-century comprised of four boundaries and a six.

Jadeja then shifted gears in a bid to finish the game off in a jiffy and went after Sean Williams. He dispatched a low full toss straight down the ground. A couple of deliveries later, he stepped out and lofted one towards the long on boundary and the fielder at the ropes could just manage to get his hands on the ball but in vain as the ball sailed over the ropes for a six.

Dinesh Karthik, who walked out after Rahane’s dismissal, rotated the strike as India closed in on the Zimbabwe total. In the end, Jadeja sealed Zimbabwe’s fate with a pull shot for a six to end the sucessful run chase with seven wickets in hand and 16 overs to spare.