It appears India will reach the target well within 15 overs.

India have begun their chase of UAE’s 81 in great fashion. Rohit Sharma is the only batsman to get out so far. He scored a quick 39 off just 28 balls. He hit seven boundaries and two sixes in his innings. MS Dhoni preferred to send Yuvraj Singh ahead of Virat Kohli in this match. He is batting along with Shikhar Dhawan at the moment and the way India is crusing ahead, it appears that they will reach the target well within 15 overs. Talking of the UAE’s innings, they lost three quick wickets early on. UAE captain Amjad Javed won the toss and elected to bat first. They lost their first wicket in the form of Swapnil Patil. Live Cricket Scorecard: India vs UAE, Asia Cup T20 2016 Match 9 at Dhaka

Patil was caught and bowled by Bhuvneshwar Kumar for just one run off nine balls. Mohammad Shahzad, who came next did not trouble the scorers and went for a duck off four deliveries. He was caught by Raina off the bowling of Jasprit Bumrah. UAE were two wickets down with only the same number of runs on the scoreboard after 3.3 overs. Rohan Mustafa was the third to go. He was caught by Virat Kohli off Hardik Pandya for 11 runs. Live Blog: India vs UAE, Asia Cup T20 2016 Match 9 at Dhaka

UAE batters looked fidgety facing the likes of Bhuvneshwar, Bumrah and Pandya. All the Indian bowlers were pitching the ball pretty well in the right areas and also swung the ball to good effect. Shaiman Anwar and Mohammad Nawaz tried to steady UAE’s innings. They started off slowly giving the Indian bowlers respect. Shaiman Anwar then got run out in the death overs after playing a fighting 43. Besides Anwar and Mustafa, no other UAE bowler could reach double figures. 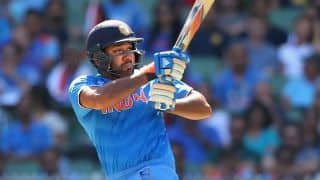