India cricketer Yusuf Pathan expressed optimism that he would be able to make a comeback into the national squad like his brother Irfan, who is presently playing in the triangular ODI series in Australia. 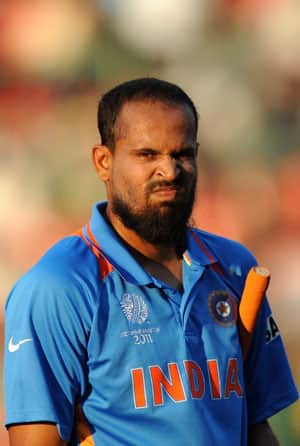 India cricketer Yusuf Pathan expressed optimism that he would be able to make a comeback into the national squad like his brother Irfan, who is presently playing in the triangular ODI series in Australia.

“Obviously will try to play well (in the West Zone one day tournament commencing on February 22). Irfan has come back after a long time and bowled well in last match and is doing well. When I start playing I will perform well. I have full confidence I will make a comeback into the team,” said Pathan, who was part of last year’s victorious World Cup squad.

The 29-year-old Baroda all-rounder, who hits powerfully down the order and bowls flat off breaks, was out of the Indian team since the tour to the West Indies where his performance was disappointing.

To add to his woes he hurt his knee while taking a diving catch off his brother Irfan’s bowling in the Ranji Trophy league match against Haryana last November and missed the rest of the tournament.

He said he had worked hard at the Bangalore-based National Cricket Academy to regain his fitness.

“I am fully fit. I have worked hard at the NCA and the trainers have helped. Forget about the injuries. Ground pe hoon bahut hai (I am on the ground, that’s enough),” said the big-hitting batsman after Baroda’s practice session at the Wankhede Stadium ahead of their league opener against hosts Mumbai in the Vijay Hazare trophy on Wednesday.

Desperate to prove a point, Yusuf is eagerly waiting to play in the one-day tournament.

“Obviously the domestic one-day cricket is always very important. I am playing in it after a long time and I am excited to play four matches,” said Pathan, who has played 56 ODIs for the country since his debut in Dhaka against Pakistan in June 2008.

Pathan did not read too much into his axing from the national squad and said his selection depended on what the team management and the selectors felt as far as the squad mix was concerned.

“It (selection) depends on the team’s needs. The team management decides and selectors also decide on team combination. I have confidence of coming back into the team.”

He saw a lot of cricket ahead of him for fulfilling his aim.

“A lot of cricket is left. The one dayers are starting.

The India ‘A’ team is also touring, then the IPL is there and then the T20 World Cup (in Sri Lanka). A lot of time is there, some quality time to make improvement,” Pathan said.

The all-rounder conceded that it was difficult to be out of the Indian dressing room but said he utilised the break to learn a few things about fitness.

“It’s difficult (to be out of the team). I was injured for a long time. When I had not been part of the Indian team I was able to learn a lot. In this 2-3 months, I learnt about fitness. (Baroda’s) Sanath Kumar is a good coach and I have learnt from him also.”

Asked whether he needed to improve his shot selection, Pathan said it was not possible to check himself in the short time he gets to bat in ODIs in general.

Pathan was referring to his whirlwind unbeaten 123-run knock off 96 balls against New Zealand at Bangalore in December 2010, and his equally brutal knock of 105 in 70 balls against South Africa at Centurion in January last year.

Pathan felt that while a quick 15 or 30 may not get noticed often, it was vital in the team’s interest.

“I am not frustrated at all that I have only 12 balls or one over to bat and I have got out while trying to hit.

These things happen. I am always positive, I always play for the team,” he explained.

About the new limited overs experimental rule of two bouncers per over, Pathan felt it was as much a help to the batsman as the bowler.

“Batsman ke liye bee easy hai (it’s good for the batsmen too), as there are four other balls left (which cannot be bouncers). It’s good for both batsmen and bowlers.”(PTI)