India bounced back in style at the tri-series in the Caribbean with a comprehensive 102-run victory over West Indies. Captain Virat Kohli led from the front with a breath-taking hundred that powered India to 311 in their 50 overs. In reply, West Indies crumbled as the Indian bowlers put in a team effort to bowl them out. 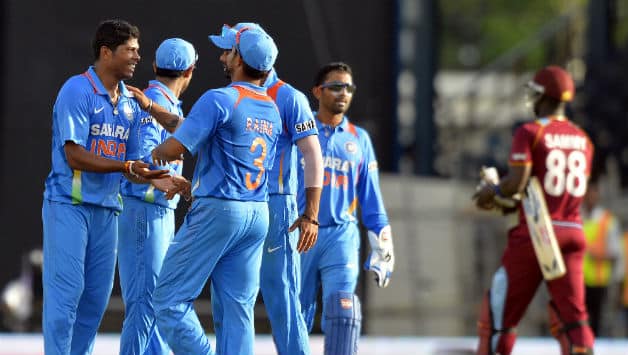 India bounced back in style at the tri-series in the Caribbean with a comprehensive 102-run victory over West Indies. Captain Virat Kohli led from the front with a breath-taking hundred that powered India to 311 in their 50 overs. In reply, West Indies crumbled as the Indian bowlers put in a team effort to bowl them out.

West Indies were bolstered by the return of their captain Dwayne Bravo as he came in place of Devon Smith. India made one change to their side as Shami Ahmed made way for Bhuvneshwar Kumar. West Indies won the toss and put India in to bat.

There was an obvious change in tactics for the Indian openers as they were cautious and measured in their approach. Both Rohit Sharma and Shikhar Dhawan weren’t their usual aggressive selves and were content in farming the strike over and targeting the odd boundary ball. However, Dhawan did shift gears and got to his fifty. He was particularly severe on Narine at one point smashing him for two sixes in one over.

However, once the openers fell, India lost wickets at regular intervals, with Kohli stranded in the middle. When Ravindra Jadeja fell, the score read at 221 for six in 41.4 overs. That is when Kohli started turning things around.

With Ravichandran Ashwin giving him support, Kohli smashed the West Indies bowlers. Anything on a length was pulled away to the on-side. He also made room to nonchalantly loft them over the off-side. He sped away to his hundred as India crossed the 300 mark, something that looked difficult at one stage.

West Indies needed a good start and Chris Gayle looked in his elements. But, Bhuvneshwar Kumar was back in the side and showed why he is so valuable to the Indian side. He snared Gayle and Darren Bravo early as West Indies stuttered.

Johnson Charles continued to smash his way past the Indians and looked in complete control. There was some rain and that resulted in a stoppage. Once the conditions eased, the innings was reduced to 39 overs and West Indies needed to score 274 in them. That seemed too much and they crumbled under it as Umesh Yadav and Ishant Sharma joined Bhuvneshwar’s party.

Ishant used his bounce to trouble the batsmen as Samuels edged one to the wicket-keeper and Charles mistimed a pull. Kieron Pollard also received a snorter from Bhuvneshwar as it climbed on him and the ball flew to first slip. Yadav then rattled the lower middle-order with his pace.

Narine and Roach threw their bats around and frustrated the Indians. They added 58 for the ninth wicket. Batting like frontline batsmen, they were able to hit a few sixes and found batting quite easy. India didn’t do themselves any favours by dropping a few chances. However, the task was too tall by them and they ended up conceding a bonus point.

India are on the board at the tri-series and need a win against Sri Lanka to further their chances for a berth in the final.