Atul Wassan on Tuesday said that the Virat Kohli-led side will have edge over New Zealand when the two sides head into three-match ODI series.

New Delhi: Former Indian cricketer Atul Wassan on Tuesday said that the Virat Kohli-led side will have edge over New Zealand when the two sides head into three-match ODI series, beginning October 22 at the Wankhede Stadium in Mumbai. While talking to ANI, Wassan said that he doesn’t believe that the upcoming one-day series against New Zealand would have much relevance and that it would to bring boredom for cricket fans. “I don’t think there is much relevance of the one-day tournament at this point of time. All the one-day tournaments are played close to the World Cup. But, the World Cup is still way off. We recently played a series in Sri Lanka and did really well. When Australia came to India, we really looked forward to them because they are the top team. With New Zealand, we have already beaten them recently and we know that there is quite a difference between the two teams. I don’t think so it is going to add too much value. But, you have to cramp up the international calendar and, therefore, we are playing,” Wassan said. FULL CRICKET SCORECARD: India vs New Zealand 2017-18, 1st ODI at Mumbai

Besides ODIs, India are also slated to play two-match T20I series, beginning November 4 at the Saurashtra Cricket Association Stadium. Meanwhile, Wassan also heaped praise on former Indian captain and head coach Anil Kumble, who turned 47 on Tuesday. The 50-year-old said that Kumble was one of the greatest bowlers in the world and that he feels really proud to be associated with him. IND vs NZ 2017-18: Boult heaps praise on Shaw

“Jumbo [Anil Kumble] was my first roommate when we went to England in 1990. And I have got fond memories. He made his debut in Manchester. And from there on, as a bits and pieces bowler and a little bit of bating he used to do at that time. He went on to become one of the greatest bowlers in the world. I feel very proud that I was associated with him. It was wonderful to see him win games for India. As a coach, he did very well for India. He has got a lot of attributes and made a great contribution to Indian cricket,” Wassan said.

Regarded as one of the best spinners India has ever produced, Kumble appeared in 132 Tests and 271 ODIs for India before bidding adieu to the game in 2008. Kumble, who amassed a total of 619 Test wickets, also became only the second bowler in cricket to claim all ten wickets in an inning of a Test match. He achieved this feat against Pakistan in 1999 in New Delhi. Prithvi Shaw s all-round show hand Indian BP XI 30-run win over NZ

Earlier this year, Kumble stepped down from the position of head coach following ICC Champions Trophy in England, saying that skipper Virat Kohli had reservations about his work ‘style’ and his extension. Kumble was appointed as coach in June 2016 for a one-year term by the Cricket Advisory Committee (CAC) and was instantly successful. Under him, India won Test series against West Indies, New Zealand, England, Bangladesh and Australia. 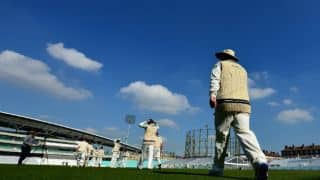