Indian bowlers put in an inspired show before Virat Kohli returned to form with a rollicking unbeaten 77 as the hosts spanked England by seven wickets in the third one-dayer to make captain Mahendra Singh Dhoni's first match in his home town a memorable one. 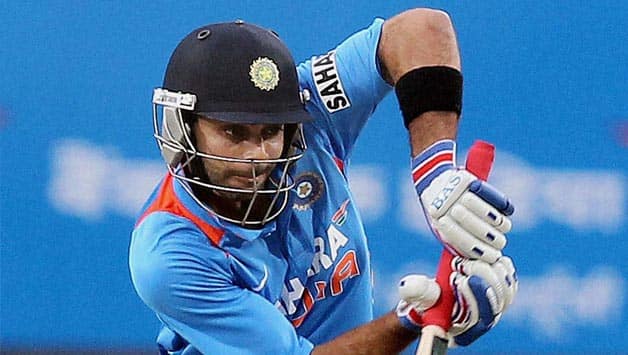 Indian bowlers put in an inspired show before Virat Kohli returned to form with a rollicking unbeaten 77 as the hosts spanked England by seven wickets in the third one-dayer to make captain Mahendra Singh Dhoni‘s first match in his home town a memorable one.

India first bundled out the visitors for a paltry 155 in 42.2 overs riding on Ravindra Jadeja’s 3/19 and then chased down the target with 21.5 overs to spare to take a 2-1 lead in the five-match match series.

Nearly 40,000 vociferous spectators at the newly built JSCA Stadium cheered Kohli, who rediscovered his form, and other Indian batsmen as they went about the run chase without much fuss in what turned out to be a rather lop-sided contest.

The script unfolded like a dream for home boy Dhoni as he won the toss and his bowlers responded magnificently by skittling out the visitors for a meagre total though it was not a difficult wicket to bat on.

Only Joe Root (39) could hang around for long while opener Ian Bell (25) and Tim Bresnan (25) were the other contributors as England lost wickets at regular intervals.

Apart from Jadeja, who again excelled with his left-arm spin, R Ashwin and Ishant Sharma chipped in with two wickets apiece to maintain the pressure on the hapless Englishmen who never recovered from the early jolts.

India also lost opener Ajinkya Rahane (0) early but Gautam Gambhir (33) and Kohli steadied the innings to some extent by putting on 67 runs for the second wicket.

After Gambhir’s dismissal, Kohli and Yuvraj Singh (30) accelerated the pace of scoring with a flurry of explosive shots much to the delight of the home crowd. Yuvraj was, however, out with 12 runs left.

Kohli blasted as many as two sixes and nine fours during his knock which formed the cornerstone of the Indian response.

Dhoni hit the winning runs by pulling Steven Finn to the square-leg boundary to trigger off scenes of celebration in the galleries and the Indian dressing room.

The two teams will now travel to Mohali for the fourth match to be held on January 23.

The biggest positive for India was Kohli’s return to form as he became the second fastest batsman — behind Vivian Richards — to get 4,000 ODI runs, with his 22nd half-century.

With 12 runs required, Yuvraj was bowled by James Tredwell as Dhoni, who usually bats at number seven, promoted himself to number four with the crowd welcoming their hero with a deafening cheer.

Finn was brought into the attack with England looking for Dhoni’s wicket for a possible an anti-climax but it was the Indian captain all the way. Even his shot that hit the stumps raced to a boundary taking India five runs off the target.

Chasing a small target, India did not have any trouble barring the third over blip when Finn bowled Rahane for a duck with a delivery that nipped back, crashing the right-hander’s gate before uprooting the off-stump.

The English bowlers tested the Indian top-order with raw pace and bowling short but did not have much impact as the home side cruised to 48 for one in 10 overs.

The stage was set for Kohli to get back his silken touch and the right-handed youngster did exactly that with an aggressive approach.

James Dernbach bowled short with 140-plus kmph to Kohli who responded well with three boundaries on the trot as the whole stadium erupted in joy.

Kohli then hit two consecutive boundaries to Finn, one of them an elegant drive past mid on, to race to 31 from 28 balls with India firmly in control of the match. Gambhir looked rusty, but with Kohli going all guns blazing, it hardly was a reason to bother for India.

England persisted with Finn as the tall pacer bowled eight overs at stretch but Kohli remained firm taking on the visiting attack as India raced to 70/1 in 15 overs, with a lopsided equation of 86 needed from 35 overs
England finally broke the stand that yielded 67 runs, when Gambhir stepped out to James Tredwell but only to be caught by Root.

The clamour for the local hero Dhoni to come out at the middle grew at the stands but the Indian skipper resisted the temptation and stuck to the order with Yuvraj coming at number four.

Kohli, meanwhile, completed his 22nd half-century in 58 balls, and when on 49, he got past his 4,000 ODI runs in second quickest time in history. Kohli reached the mark in his 93rd innings, behind Sir Viv Richards’ record of 88 innings.

Yuvraj supported Kohli well with a 30 and then left it to Dhoni to finish off the match in style in front of his home crowd.

Earlier, England once again fell flat against slow bowlers as a disciplined Indian bowling attack skittled them out for a paltry 155.

Quelling the element of doubts about his availability after he was hit on right thumb at yesterday’s practice, captain Dhoni had everything right from the toss in the first match at his home venue.

First, he called it right at the toss, put England to bat and reduced them to 98 for six from 68 for three at one stage.

Even there was a bit of luck going in the skipper’s favour as a poor umpiring decision by Indian official S Ravi gave the home side the prized scalp of Kevin Pietersen.

After the fall of Pietersen, English batsmen showed little appetite to stay at the crease as the Indian slow bowlers made their presence felt in front of a capacity crowd of 39,000 at the JSCA Stadium which is hosting its first international match.

Joe Root was the England top-scorer with 39 as the visiting top-order failed miserably.

After being reduced to 98 for six, Root and Tim Bresnan stitched 47 runs for the seventh wicket but after the fall of the former, it was all over for England.