Australia were undone by spin in the first one-day international but skipper Steven Smith has warned his side need to be ready for India's other bowling weapons.

Australia were undone by spin in the first one-day international but skipper Steven Smith has warned his side need to be ready for India’s other bowling weapons. The tourists were frustrated by wrist spinners Yuzvendra Chahal and Kuldeep Yadav, who took five wickets between them, as Australia went down by 26 runs in an attempt to chase a rain-shortened target of 164 in 21 overs. Australia had brought in local bowler KK Jiyas ahead of Sunday’s game to practise facing a left-arm wrist spinner and Smith said the performance in Chennai was disappointing but that his side have got to be ready for more. ALSO READ: Never easy chasing 160 with two new balls, says Smith

“We certainly haven’t just been focusing on wrist spin. We’ve been facing our fast bowlers in the nets and other net bowlers as well. There hasn’t just been that focus on spin bowling, that’s for sure. India have some quality seamers as well,” Smith said.

It was fast bowlers Jasprit Bumrah and Hardik Pandya who rattled the Australian top order before the spinners moved in. Leg-spinner Chahal and Yadav also slipped in a few knuckle balls bowled with fingertips and released in a way to reduce any kind of rotation on the ball for shock value.

Smith insisted there were no surprises in the game, as Australia had prepared for all challenges.

“The guys knew what they were going to come with before this game. Everyone had seen the footage and watched a bit of the series in Sri Lanka where they bowled quite a few (knuckle balls). It wasn’t any surprise to us. Batting for 20 overs is difficult when you are losing wickets and trying to go quite hard. It didn’t work out as we would have liked but we’ve got to turn things around in a couple of days’ time in Kolkata,” he added.

Smith also believes Australia spinner Adam Zampa has to respond, after taking a beating against Pandya whose 83-run blitz took India to 281 for 7 in 50 overs. Pandya smashed the leg spinner for a four and three successive sixes in one over to bring up his third ODI fifty.

Zampa did make Pandya his only wicket of the innings. But the bowler’s 10 overs cost 66 runs.

Chahal, who returned impressive figures of 3-30 in his five overs, felt there is no added expectation on the Indian spinners in such a high-profile series.

“No pressure as such. We don’t think a lot about what’s happening. We go by the situation of the wicket and since both of us are attacking, we go for wickets. Wrist spinners are mostly attacking and when your captain is so attacking you get more freedom to attack,” he concluded.

The teams travel to Eden Gardens in Kolkata for the second ODI on Thursday. 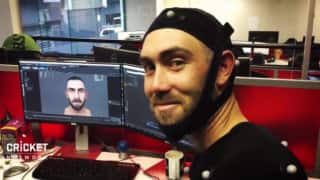