Defending champions, India, are in good control after a good and sensible start against minnows, Bangladesh, in the 2nd quarter-final of the ICC Cricket World Cup 2015 at the Melbourne Cricket Ground (MCG) in Melbourne on Thursday. Currently, India are 59 for no loss in 13 overs with openers, Rohit Sharma and Shikhar Dhawan batting on 30 and 24, respectively. Live Updates: India vs Bangladesh 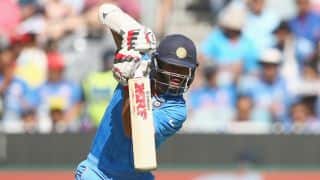