The beleaguered Indian batting line-up which has been rattled by fiery pace and disconcerting bounce during One-Day International (ODI) series will like to start afresh, when they take on a South African Invitational XI in a two-day practice game, starting in Benoni on Friday.

The match which is being held at the Sahara Willowmoore Park — some 30 kms in the outskirts of Johannesburg is not an official First-Class match as it is a two-day game where opposition teams are expected to bat on either days.

As this is not an official match, there will be provision for the batsmen to retire if they feel that they have got enough batting practice.

The likes of Shikhar Dhawan, Virat Kohli, Rohit Sharma along with Test specialist Cheteshwar Pujara will like to get a decent hit out there in the middle before they take on the formidable South African attack in the first Test starting December 18.

That is important, since the Indian team were robbed of much needed game time in the third ODI, when rain washed off the second innings without a ball being bowled.

Almost all Indian batsmen will be looking forward to batting against a second-string bowling attack. Dhawan, Kohli and Rohit need runs, while Murali Vijay and Pujara will need to acclimatize quickly to the conditions here.

The match is likely to give an indication as to who will be taking the coveted No 4 slot in the batting line-up vacated by Sachin Tendulkar‘s retirement.

If India go in with seven specialist batsmen, the toss-up will be between Ambati Rayudu and Ajinkya Rahane, both of whom will get an opportunity to bat against a second string South African bowling attack.

At the start of the tour, while bowling was of major concern, it has now reversed to problems for the Indian batting.

The Indian batting has a formidable look for its performance on the flat wickets in the sub-continent but they fell like ninepins when faced with some inspired fast bowling by Dale Steyn and company.

The Indian bowlers on the otherhand fared a little better showcasing an improvement as the ODI series progressed.

But these are old problems now, relatively, as the longer format takes over. One of the positives for Mahendra Singh Dhoni’s boys is that they have new company in the form of Test regulars here.

Murali Vijay, Chetesehwar Pujara, Pragyan Ojha, Wriddhiman Saha and Zaheer Khan reached here earlier. Even so, they have been training on their own, as a separate group from the ODI team, who were busy travelling to Durban and Centurion for the matches.

These five players have been shielded from the barrage of Proteas’ aggression, and as such can provide a new energy and perspective to the Test team, which will now come to the fore.

The group that now forms has been successful in recent times, reversing the failure against England at home, and winning six consecutive Tests at home against Australia and West Indies. Senior pro Zaheer is back, and now in Tendulkar’s absence, he is the senior-most player in the side. Not to mention, he will provide much needed bite to the bowling attack, lending experience in terms of what line and lengths to bowl, something sorely missed in the ODI series.

Since 12 players will be allowed per side, it will be an added advantage for the Indian team, for they will also get to test their entire bowling line-up. 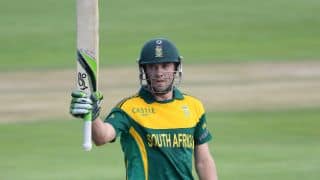