India were 13 for three in 8.3 overs before rain interrupted play.

The early overs for India were a struggle and Ajinkya Rahane and Robin Uthappa found it extremely hard to get things under way. There was plenty in it for the bowlers and it looked like it was only a matter of time before Bangladesh bowlers would strike. They struck and how. First Robin Uthappa got a thick edge of Mashrafe Mortaza and Ajinkya Rahane followed suit getting out in identical fashion off Al-Amin Hossain. The 19-year old sensation Taksin Ahmed then took off from where he left on his debut and got Ambati Rayudu off a peach before the downpour in Dhaka.

The second over showed that that the wicket had plenty in it for the bowlers in this match. Al-Amin Hossain’s impeccable line had Ajinkya Rahane in a tangle and ball beat the batsman’s edge thrice. It was nervy stuff for the Indians. Al-Amin’s second over was on target too and Rahane in particular was finding it hard to get things under way. 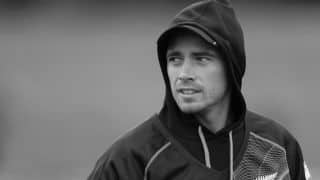