India now have their highest ODI and T20I score, both coming at Holkar Stadium, Indore.

Rohit Sharma and KL Rahul smacked every Sri Lankan bowler out of the park in the ongoing second T20I at Holkar Stadium, Indore. Rohit registered his second T20I century the highest individual score by an Indian and became first Indian to slam two hundreds. Rahul fell for 89. India went onto slam their highest T20I score, overall the joint second-highest total. Interestingly, Holkar was the venue wherein India also have their highest ODI score against West Indies, 418 for 5 in 2011.

What is it with Holkar?

On December 11, 2011, captain Virender Sehwag had towed the West Indian bowlers. Adding 176 for the opening wicket with Gautam Gambhir, Sehwag had carried on the momentum after running out his partner. He kept on attacking and did not get bogged down, and became the second Indian to register an ODI double-hundred. As a result, India were propelled to 418 for 5. The fans at Holkar were in for a treat as Sehwag whacked 32 boundaries during his stay (7 sixes). In reply, West Indies folded for 265 in 49.2 overs. For the next 3 years, Sehwag’s 219 remained the highest score in the format.

Rohit and Rahul commenced the innings by finding gaps at regular intervals. The duo found the boundaries at will and played proper cricketing shots with the feature being timing and power. Rohit went berserk after the fourth over smashing 4 successive boundaries off Asela Gunaratne. He also pulped his counterpart Thisara Perera for four consecutive sixes. Rahul followed suit. He took on the spinners and lashed onto anything outside off stump.

India settled for 260 for 5, and thereby making Holkar their batting fortress. They now have their highest ODI and T20I score at the same venue.

Also, Holkar is one of two venues where a side has won all their matches (cut-off of 6 encounters). Now after beating Sri Lanka by a massive 88 runs, they have improved this tally to 7 wins from 7 games. 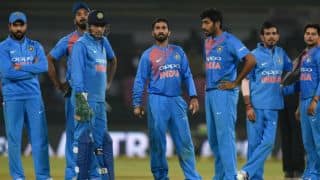