India won by 9 wkts
Man of the Match: Ravichandran Ashwin

Perth: India steamrolled the United Arab Emirates (UAE) in their ICC Cricket World Cup 2015 clash by nine-wickets at the WACA, Perth. Led by Ravichandran Ashwin’s spell of four for 25, India bowled UAE out for only 102. In reply, they were untroubled in their run-chase and got there with a lot of time to spare. The Indian players would now enjoy the early finish with a relaxing evening in Perth. Live Scorecard: India vs UAE in ICC Cricket World Cup 2015 at Perth

The difference in class between the two sides was quite evident from the outset. Although UAE had shown good fight in their first two games against Zimbabwe and Ireland, India were a different cup of tea. It was always going to be a tough contest for them, but they did put the positive foot forward by winning the toss and electing to bat first. India had only one change to the side as Mohammed Shami was out due to an injury worry and Bhuvneshwar Kumar came in his place. Live Updates: India vs UAE in ICC Cricket World Cup 2015 at Perth

India were attacking the UAE batsmen with short deliveries and they were clearly uncomfortable against that strategy. The openers, Andri Berenger and Amjad Ali, were dismissed off short deliveries as Umesh Yadav and Bhuvneshwar used those weapons to good effect. Yadav in particular was too hot to handle for UAE as his pace left them rattled, as they played and missed on numerous occasions. ICC Cricket World Cup 2015: SCHEDULE & MATCH DETAILS

Following the initial burst, Ashwin came into play and bowled in good channels to put UAE under further pressure. The run-scoring had stagnated and UAE kept losing wickets at regular intervals. MS Dhoni had kept the pressure going with attacking fielders in place. The slips were a constant feature through the innings. In all, six batsmen were caught behind the wicket. Khurram Khan fought briefly but fell for 14. Shaiman Anwar, the centurion from the previous game, extended UAE’s score with a solid 35. He was easily their best batsman and took UAE past 100. Perhaps, UAE’s best moment with the bat was when Mohammad Naveed made room to the first ball he faced and carted Ravindra Jadeja for a six over long-on. ICC Cricket World Cup 2015: POINTS TABLE

The total of 102 was never going to challenge India. They started gradually, with Manjula Guruge and Naveed bowling well. Rohit Sharma needed to get some runs behind him and batted calmly to get his confidence going. UAE had one electrifying moment when Shikhar Dhawan cut one to point, where Rohan Mustafa stuck his hand up and plucked it in the air. A moment of inspiration, but UAE needed many more if they were going to scare India.

Rohit and Virat Kohli continued easily and picked the runs around the ground. Rohit got to his half century in process. There was a break in between as it was scheduled around 6 PM local time. India needed only 15 then and had to return 40 minutes later to knock the runs off. Another complete team performance from India and they will face the West Indies on March 6. UAE head to New Zealand for their next encounter. 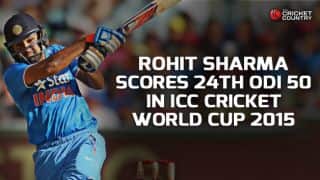