Virat Kohli, India usual No. 3, batted at No. 6 behind Suresh Raina, MS Dhoni, and Hardik Pandya.

Virat Kohli believes a flexible batting order will help keep India’s opponents guessing while they are in Ireland and England. India launched their tour with a 78-run thrashing of Ireland in the first T20 International at Malahide on Wednesday. Kohli was involved in two surprises: he came in at a relatively lowly number six and was promptly out for a second-ball duck.

But by then India were well on the way to going 1-0 up in a two-match series, with Rohit Sharma (97) and Shikhar Dhawan (74) sharing an opening stand of 160 in 16 overs. Suresh Raina was then sent in when Ireland eventually ended India’s second-highest opening T20I stand. MS Dhoni and Hardik Pandya came in at the fall of the next two wickets before Kohli decided to go in with just 3 balls remaining.

After they leave Ireland, India have 3 T20I matches against England before they face them in both ODI and Test series.

“The middle order is something we can experiment with in T20 games,” said Kohli. “I’ve got a good mindset of who’s batting where so in the next few games, not just the Ireland ones but also against England, we will look to be flexible and use them as and when the situation requires them. We will look to surprise the opposition and we’ve asked the batsmen to have that flexibility and they have responded very well.”

KL Rahul and Dinesh Karthik were the surprise omissions from the India team that played its first match in Ireland for 11 years, but are set to get a chance when the teams return to Malahide for the second T20I on Friday: “We are using these two games to play everyone, and I have already told them that the guys who didn’t play will get an opportunity in the next game.”

The other squad members in line to play on Friday are Washington Sundar, Umesh Yadav and the uncapped Siddarth Kaul, the new face in the tour party after impressing for Hyderabad in the IPL.

Malahide must have felt like home for India on Wednesday given they were playing in warm temperatures more commonly associated with Delhi rather than Dublin, while over half of the 9,000 crowd were supporting the tourists. There was a muted reception for Raina when he walked into bat, but uproar when Dhoni was next in. Kohli, too, was also cheered to the wicket as he would be back home, although Peter Chase dismissed both batsmen cheaply on his way to international best figures of 4 for 35.

James Shannon provided the only Irish resistance with the bat, hitting 60 from 35 balls. But he was the second of Man of the Match Kuldeep Yadav’s 4 wickets and, with fellow India spinner Yuzvendra Chahal taking 3, Ireland were held to a total of 132 for 9 in 20 overs.

This has already been a landmark year for Irish cricket, with the men’s side playing their inaugural Test against Pakistan at Malahide in May — a match that ended in a creditable defeat on the last day.

Wednesday’s reverse was a far more chastening loss but Ireland T20I captain Gary Wilson, while “obviously disappointed”, insisted: “We can look forward to Friday because I do think we had enough positives out there to show that we can play against teams like these. We’ve obviously been beaten by 70-odd runs, a big margin in Twenty20 cricket. But if we can negate their spin in Kuldeep and Chahal, that would stand us in good stead.” 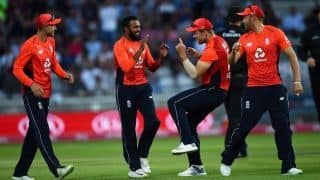 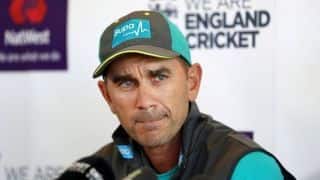