A disciplined bowling performance by India saw New Zealand bowled out for 105 thereby setting a 407-run target for the visitors on Day Three of the first Test at Auckland on Saturday.

After conceding a 301-run lead to the hosts, there was little hope to bank upon for India. Yet, some exceptional fielding from Ravindra Jadeja and an accurate bowling from Mohammed Shami saw, New Zealand crash to 15 for four when they went in to lunch. A good length delivery on the leg-stump held its line and struck Hamish Rutherford plumb in front as he departed for a first-ball duck. Peter Fulton too departed with a loose drive straight to Jadeja at short extra-cover. It was Kane Williamson‘s dismissal which lifted the spirits of the Indians. An uppish flick off Zaheer Khan’s bowling was caught by Jadeja diving to his right inches above the ground. Jadeja then followed it up with a brilliant throw running towards the deep to effect skipper Brendon McCullum’s run-out.

The Indians sniffed an opportunity to suppress the bulging lead. Immediately after lunch, Shami got the key wicket of Corey Anderson with an incoming delivery going through the gates of the left-hander.

With five down for 35, India were in a hurry to finish things off when they stumbled upon some resistance from Ross Taylor with keeper BJ Watling hanging around. Zaheer finally snared Taylor for 41 caught in the slips by Ajinkya Rahane. Taylor did the bulk of the scoring for the Kiwis. With his dismissal the Indians were back to attacking and just an over before tea, Jadeja set up Southee who fell for the trap and was caught for 14.

Soon after tea, Ishant got the better of Watling whose stubborn resistance came to an end scoring a 72-ball 11. Ish Sodhi too was sent back for a duck in the same over. The last wicket pair hung on for a while and took the lead past 400. 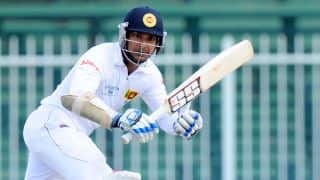