For India to succeed in Australia they will need to get used to the conditions there, feels former captain Ricky Ponting.

For India to succeed in Australia, they will need to get used to the conditions there, feels former captain Ricky Ponting. After a 1-4 defeat to England in the Test series, India play two more Tests against the West Indies before travelling to Australia to play three T20Is, three ODIs and four Tests.

Ponting, who played 168 Tests and 375 ODIs for Australia, pointed out that India will not find it easy beating Australia on their home turf. The last time India toured Australia in 2014-15, they lost the series 0-2. The first Test starts December 6 at the Adelaide Oval.

“We know in last 50 years India have struggled to win Test series away from home. For any team travelling to UK playing against a team as good as England, it is going to be difficult.”

Widely regarded as Australia s most successful captain, Ponting had a word of advice for Indian captain Virat Kohli. By what he has observed from the Test series in England, Ponting believes that Kohli needs to be more proactive in making off-field decisions.

“I didn’t watch every single ball of the Test series. For me what happens off the field is more important,” Ponting, who led Australia to two World Cup wins, said. “On the field part like bowling changes or field placement is highly overrated. It is only about 30 or 40 per cent and the rest of the preparations takes place behind closed doors before a match.”

With the kind of batting from India which was on display on the tour of England, Ponting reckons the batsmen will have to perform a lot better in Australia. India will likely be up against the pace trio of Mitchell Starc, Pat Cummins and Josh Hazlewood, along with the spin threat of Nathan Lyon. But while England is known for swing, Australia is known for its bounce to making life tough for the batsmen.

“For the upcoming series as far as India is concerned a lot will depend upon the wickets. If the ball seams a lot they will find it difficult in Australia. But if the wickets are flat like we saw some last year then it can bring India right into the contest,” Ponting said.

Weighing on the comparisons drawn between Kohli and former India cricketer Sachin Tendulkar, Ponting mentioned that the Indian captain has a long way to be before being put in the same league as his idol. Tendulkar holds the record for most number of international runs, centuries and playing 200 Tests, and Ponting feels it is too early in Kohli s career to be drawing parallels with former batting great.

“Comparisons are hard to make at this stage of his (Kohli’s) career. You are being compared with someone who has played 200 Test matches. What you remember about Sachin is when he was finishing off. You don’t remember when he was in mid 20s,” he said.

“Everyone is saying exceptional things about Virat (Kohli) now but let’s see if he can dominate international cricket for about 10, 12 or 15 years which would be a sign of a real champion player. Sachin did that in all three formats. If someone can play 200 Tests its incredible. I myself have played 168 Tests but 200 is something else.” 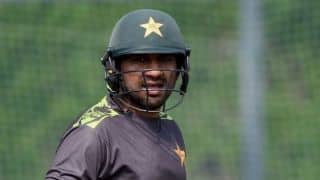 Champions Trophy win over India a thing of past: Sarfraz Ahmed