India lost a couple of early wickets after wrapping up New Zealand's first innings at 365 and reached 63 for two at lunch in a session dominated by the visitors on the second day of the second and final cricket Test on Saturday. 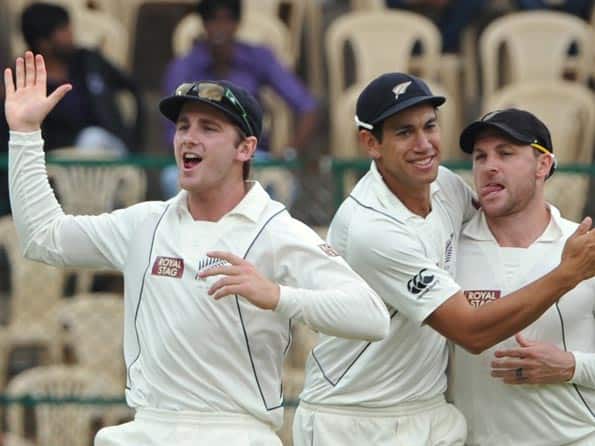 India lost a couple of early wickets after wrapping up New Zealand’s first innings at 365 and reached 63 for two at lunch in a session dominated by the visitors on the second day of the second and final cricket Test on Saturday.

At lunch, India were 63 for two with Virender Sehwag and Sachin Tendulkar, on 39 and 4 respectively, holding fort. Both of them arrested the early slide by countering New Zealand pacers who used the overcast conditions to perfection.

Sehwag, who survived a loud appeal for leg before off Southee early on, looked in devastating moods giving scant respect to the Kiwi pacers.

Giving momentum to the Indian innings after the hosts were in a spot of bother, Sehwag cut loose soon after Gambhir fell at the other end.

The aggressive right-hander made merry by flicking, driving and slashing hard at the deliveries bowled at him.

Tendulkar, who sweated it out at his defence during the nets before the start of the match, played cautiously on a wicket which helped the seamers.

Starting their first innings, the Indian openers had a torrid time out in the middle as Trent Boult and Southee, used overcast condition and moisture on the surface. Both swung the ball and put Gambhir and Sehwag in a spot of bother.

Gambhir, who was lucky to have survived after Brendon McCullum dropped him on one in the slips, fell for two off a Southee ball that curved in and clipped the bail on way to the keeper.

Pujara showed promise early on but fell to a Southee’s gameplan in which the pacer invited him to hook the ball which landed safely in the hands of Boult at fine leg. The youngster made just nine runs with a lone boundary to his name.

Earlier, India wrapped up the Kiwi innings for 365 with the visitors losing four quick wickets in quick succession after their tail did not wag much and could muster only an additional 37 runs to their overnight score.

First to go was Kruger van Wyk for 71 while trying to steer Zaheer Khan but managing to hit in the air to the second slip where Suresh Raina dived to his right to take a sharp catch.

Doug Bracewell, who played cautiously along with him yesterday, dealt in boundaries against the Indian attack but was run out for 43 off 79 balls after Zaheer’s misfielding hit the wicket at the non-striker’s end.

Jeetan Patel did not stay long as he faced two balls before getting out for a nought to seamer Umesh Yadav.

The New Zealand innings folded after Pragyan Ojha claimed his fifth wicket by trapping Southee who made 14 runs with two hit to the fence.

Australian cricketers lament death of their soldiers in Afghanistan