Indian bowlers let England off the hook and allowed the visitors to recover from a difficult position as they reached 199 for five at stumps on the opening day to leave the crucial fourth and final cricket Test evenly poised on Thursday. 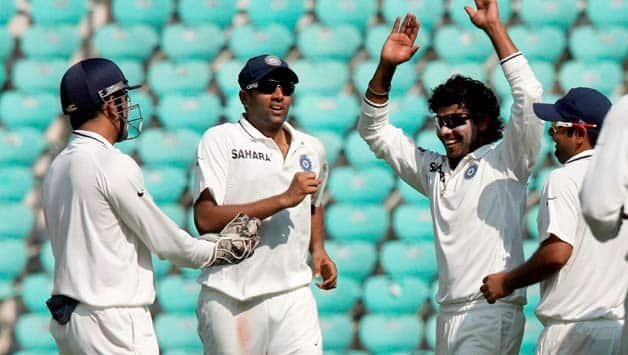 Indian bowlers let England off the hook and allowed the visitors to recover from a difficult position as they reached 199 for five at stumps on the opening day to leave the crucial fourth and final cricket Test evenly poised on Thursday.

The home team had England in a real spot at 139 for five soon after tea but failed to seize the initiative as debutant Joe Root and the experienced Matt Prior batted for nearly 30 overs to add 60 runs for the unbroken sixth wicket stand.

The new-look Indian bowling attack had kept the high-flying England batsmen under tight leash and made them struggle for every run in the first two sessions before Prior batting on 34 and Root undefeated on 31 added valuable runs in the final hour.

Kevin Pietersen was the top-scorer for England with an innings of 73 while debutant Ravindra Jadeja got two wickets for 34 runs having bowled 25 overs.

England captain Alastair Cook won the toss for the first time and visitors were rocked back by twin strikes within the first hour by Ishant Sharma but recovered briefly to get past the 100-run mark.

However, they got bogged down by the loss of three more wickets two of which were claimed by 24-year-old debutant Jadeja and the other by comeback man Piyush Chawla, before staging their second recovery of the day through Root and Prior.

The sixth wicket pair, whose unfinished partnership has lasted five minutes under two hours, came together when Kevin Pietersen was dismissed by Jadeja trying to play towards mid-wicket as Pragyan Ojha took a low catch diving forward.

Pietersen was lucky to survive when on 61, as his flick fell in front of Cheteshwar Pujara fielding at short mid-wicket but he perished to an identical shot 12 runs later.

Chawla, who bowled five overs in his first spell, struck almost immediately in his second spell when Bell, who scored just 1 in 37 minutes and off 28 balls, played a loose drive to a well-tossed up leg break to be snapped up smartly at short extra-cover by Virat Kohli.

In the morning session, Ishant bowled with good rhythm to rattle the visiting team on a pitch that had uneven bounce.

The lanky pacer, who was unwell before the first Test at Ahmedabad, and was not picked for the second Test in Mumbai as India went in with three frontline spinners, was not averse to digging the ball in short.

And it was a short ball that accounted for the wicket of Compton who nervously edged it to Dhoni.

It was only the third time that India had managed to break the opening stand between Compton and Cook below 30 and the second successive time in single figures after the second innings in Kolkata when the visitors lost their captain early in pursuit of a small target and lost two more wickets before winning the game.

Trott, lucky not to be given out leg before off Ishant when he was struck in line with the off stump while he was on six.

While Ishant had the best figures of two for 32, Jadeja and Chawla, who got one for 39 from his 13 overs, also did a commendable job.

The first-choice spinners Pragyan Ojha and Ravichandran Ashwin went wicketless on a strip that afforded a bit of slow turn which negated strokeplay.

England crawled their way right through the day against the tight field setting and kept a rate of just above 2 runs per over for the better part of the day.

Pietersen, unconquered on 68 after a stay of 193 minutes at tea, fell in the third over into the last session trying to step out against Jadeja and flicking to short mid-wicket fielder Ojha who brought off a good catch inches off the turf with a forward dive.

It was a huge blow for the visitors, after the morning strike that sent back Cook, the two batsmen who have dominated the Indian bowlers in the series the most.

Coming together in the first hour of play in the 11th over, the third wicket pair saw off till lunch session without being separated and then continued in the same vein post the interval, putting on a partnership worth 86 runs in 39.4 overs in the process, to wrest back the initiative briefly before the home team fought back.

The two batsmen easily negotiated the spin quartet quite comfortably though Trott looked in two minds whenever Sharma dug the ball short.

Pietersen appeared in no trouble at the other end and completed his 50 in 108 balls and 117 minutes with a glanced four off Ashwin who then made way for Jadeja as latter proved to be a partnership breaker. .