PCB chairman Shahryar Khan clarifies then they can look at finding a window to play a bilateral series sometime only in 2016.

Karachi: Pakistan Cricket Board Chairman Shaharyar Khan has finally given up hope of organising the proposed Indo-Pak series in the near future but has set sights for next year for the resumption of bilateral cricketing ties between the two countries. Khan told the media in Lahore today that he had finally given up hope of organising the bilateral series against India in either UAE or Sri Lanka in December-January. “It is impossible to hold the series now as valuable time has gone. But we will now wait and see when the Indian Board tells us they have got clearance from their government to play with us,” Khan said. ALSO READ: India vs Pakistan 2015-16: Anurag Thakur rules out series

“If the clearance comes from the Indians, then we can look at finding a window to play a bilateral series sometime in 2016,” the PCB chief said. Khan said the PCB believed that it was important for Pakistan and India to resume bilateral ties. If not this year, we can do something in 2016 but it will all depend on the Indian board telling us when they are ready to play,” he said.

He said whenever the Indian Board got the clearance from its government and a series was planned, it would be Pakistan’s home series as per the MoU signed between the two countries. The PCB chief has faced a lot of flak for his insistence that the series with India would be held in December-January. ALSO READ: India vs Pakistan series awaiting government nod: BCCI to Giles Clarke

Earlier,Shahryar did say that the Pakistan Cricket Board (PCB) have not approached the Foreign Minister for travel advises to India especially for the ICC World Twenty20 2016 to be held in India between March 9 to April 3. In conversation with The Telegraph on Wednesday, Shaharyar Khan said, “We’ll certainly be doing so, but closer to the tournament. It’s an ICC event and we are committed to playing in it. However, we will be guided by what our government says. Islamabad has to decide on whether security could be an issue, not us.” The India vs Pakistan ICC World T20 match is scheduled for March 19 to be held at Dharamsala. 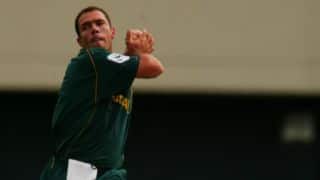