Against the backdrop of Shiv Sena s threat to disrupt the upcoming Indo-Pak cricket series, the Centre on Thursday said it would provide the best possible security to players and spectators of the neighbouring country. 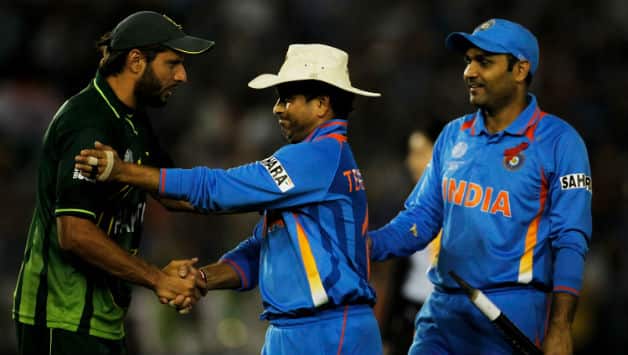 Against the backdrop of Shiv Sena s threat to disrupt the upcoming Indo-Pak cricket series, the Centre on Thursday said it would provide the best possible security to players and spectators of the neighbouring country.

Home Minister Sushilkumar Shinde said that sports and politics should not be mixed as the cricket series will pave the way for improving bilateral ties between India and Pakistan.

“When cricketers from other countries come to India, not only from Pakistan, it is our duty to protect them. We will discuss and provide best possible security. We are going to be very alert,” he said when asked about Shiv Sena chief Bal Thackeray s threat.

Mr. Shinde said there would be no compromise on the security of Pakistani cricketers and spectators.

“We should not mix sports and culture with politics.

There should be different views. This series will pave the way for the revival of better ties between the two countries,” he said.

The Home Minister said the limited over cricket series should not be mixed with the 2008 Mumbai terror attacks, which was carried out by Pakistan-based terror outfit LeT.

The Shiv Sena chief had on Monday had called upon “staunch Hindus and patriotic people of India” to disrupt cricket matches between India and Pakistan due to be played in the country next month.

Mr. Thackeray also lashed out at Mr. Shinde for his statement “to forget the past” and play cricket with Pakistan.

The series would comprise three ODIs and two Twenty20 Internationals between December 2012 and January 2013. The ODI matches will be played in Chennai, Kolkata and New Delhi and the Twenty20 games in Bangalore and Ahmedabad.

The two countries have not played a bilateral series since Pakistan s tour of India in 2007. Cricket ties between the two countries were snapped following the 2008 Mumbai terror attacks.

Asked about Pakistani Interior Minister Rehman Malik s proposed visit to India for operationalisation of the new India-Pakistan visa pact, Mr. Shinde said when he met Mr. Malik in Rome on the sidelines of the Interpol General Assembly meeting, the Pakistani leader conveyed that he may come on November 22 23.

Kevin Pietersen sweats it out ahead of India Test series