While BCCI has given consent for Sri Lanka as the neutral venue for the series, Indian government is yet to respond.

Shahryar Khan said that Pakistan Cricket Board (PCB) is waiting for Indian Foreign Minister Sushma Swaraj to come out with a response soon to the proposed India-Pakistan bilateral series. The proposed plan is to hold the series inclusive of three One-Day Internationals (ODIs) and two Twenty20 Internationals (T20Is) in Sri Lanka. While, the Board of Control for Cricket in India (BCCI) has given its consent for it, the Indian government is yet to give a green signal. Swaraj is expected to arrive in Islamabad on Tuesday to attend the Heart of Asia regional conference, the latest sign of warming ties between the nuclear neighbours. READ: Pakistan to take call on series vs India after talks between Sushma Swaraj and Sartaj Aziz

According to PTI, the PCB chief added, “For last 2-3 days, Indian High Commissioner was here for a farewell visit. He did not have much information relating to this [proposed tour]. But informally, we have been told that Foreign Minister Sushma Swaraj will come out with a brief on this issue, which will be discussed government to government. So we are awaiting that now.”

On the other hand, IPL chairman and senior BCCI official, Rajeev Shukla has suggested that BCCI will abide by any decision that will be taken by the Indian government. He said, “When you are having trade with Pakistan, both the governments are engaged in having foreign secretary level talks, minister-to-minister talks. Both the Prime Ministers are exchanging pleasantries with each other, then why the regular cricket should be singled out? Why should cricket be kept in isolation? I raised this in Parliament also today.”

“From our side, there is no deadline. Let’s wait for the government’s response. They have given a memorandum to me, which I will forward to the BCCI President, if he, after going through it finds it fit, it will be placed in the working committee, “he signed off. 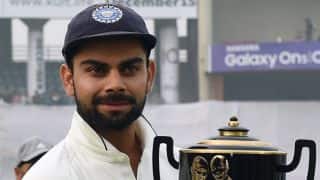