The third One-Day International (ODI) between India and Pakistan played at the Feroz Shah Kotla on January 6 was fixed, if former England wicketkeeper Paul Nixon is to be believed. 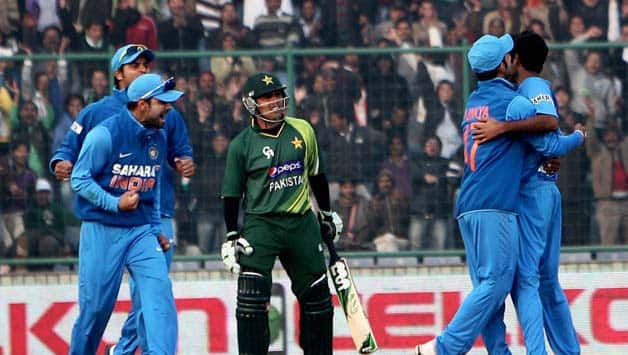 The third One-Day International (ODI) between India and Pakistan played at the Feroz Shah Kotla on January 6 was fixed, if former England wicketkeeper Paul Nixon is to be believed.

According to a report by NDTVCricket, Nixon, who played 19 ODIs and one T20 International for England implied on social networking site Twitter that the dead rubber between the arch-rivals was fixed.

His tweets during the last few overs of the match read, “Pakistan throwing this game away eh ! #thereisasurprise 24 from 24…Strangely my money is on India $$$$ from here … Watch this space.” (sic)

When one of Nixon’s followers on Twitter asked him directly whether he was implying the game was fixed, the 42-year-old said, “r u watching the game???” (sic)

Nixon also retweeted other tweets which suggested the game was fixed, such as: “This game is a joke especially when u see hafeez play a lap sweep with a leg slip in place” (sic) and “It must be India’s 12th Man…..the Bookmaker!”

India registered a nail-biting victory in the low-scoring match after putting up 167 on the board. Pakistan were then bowled out for 157 after being 113 for three at one stage. Pakistan had beaten India comprehensively in the first two ODIs.

This wasn’t the first time Nixon flirted with the match-fixing angle. In June last year, he had revealed in his book “Keeping Quiet – Paul Nixon: The Autobiography” that he was offered US$ 5 million by an Indian bookie to throw a domestic T20 match.

Nixon has since deleted the tweets in question.