Putting up a splendid all round show, India scored a comfortable 16-run win over the West Indies in the one-off Twenty20 international to begin their Caribbean tour on a resounding note here on Saturday. 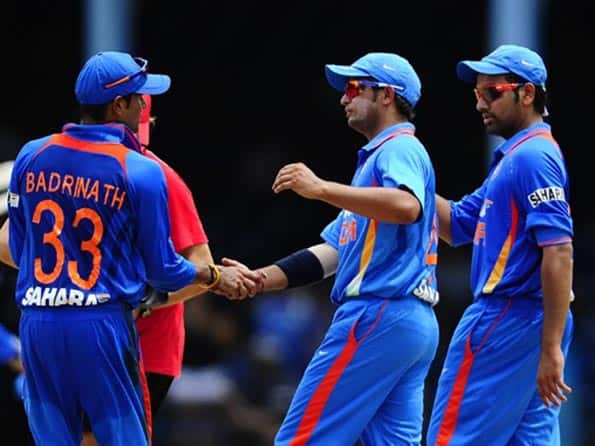 Putting up a splendid all round show, India scored a comfortable 16-run win over the West Indies in the one-off Twenty20 international to begin their Caribbean tour on a resounding note here on Saturday.

It is India’s first win over the West Indies in T20 format as they had lost the previous two encounters at Lord’s and Kensington Oval.

After being invited to bat on a tricky Sabina Park Oval strip India recovered from a top-order collapse to post a competitive 159 for six and then restricted the hosts to 143 for five.

Host skipper Darren Sammy had asked second-string India to bat under helpful conditions for the pacers and he himself did all the damage with four wickets as the visiting batsmen struggled to adjust to the bounce of the pitch.

India owed their recovery to top-scorer S Badrinath (43) and Rohit Sharma (26) as they combined for a 71-run stand for the fifth wicket after the visitors were reeling at 56 for four inside nine overs.

Indian bowlers then complimented the good batting effort from the middle-order with a disciplined performance.

For the West Indies, Darren Bravo hit a-run-a-ball 41 and Christopher Barnwell sparkled with a 16-ball unbeaten 34 but that only reduced the defeat margin for the hosts.

Sammy was on a hat-trick when Patel slashed the very next delivery to point after making a promising 26 off 20 balls with two fours and a six.

Raina survived the hat-trick ball at the start of Sammy?s next over but he too tried to force the issue all too soon and was caught well by the mid-on fielder running backwards.

India had lost its first wicket to Sammy as well who was surprised by a lifting delivery and could only guide it to the wicketkeeper with the side of his blade.

It was a bad stroke made to look worse by India’s makeshift opener as he stood his ground, contesting the appeal, till the umpire had to give him the marching orders.

India got a lucky break when middle-order bat Badrinath was caught at short extra-cover off Ravi Rampaul, returning for his second spell, only for third umpire to rule that he had overstepped the bowling crease in his delivery.

Badrinath rubbed further salt into Rampaul?s wounds when he smote the free-hit into the extra cover fence but not before fielder Ashley Nurse caught it brilliantly, running and diving full length to his left, only to touch the ropes with the impact of his body.

Badrinath, as his wont, played a busy knock of 43 from 37 balls with five fours and shared an innings-reviving 71-run fifth wicket stand with Sharma.

Yusuf Pathan (15) and Harbhajan Singh (15) then rattled off 23 runs together off a mere 11-ball association for the seventh wicket to give india a fair total.

India’s most profitable over was the sixth of the innings when fast bowler Andre Russell was smashed for 19 runs.

Man of the Match: Subramaniam Badrinath

PCB should have given proper reason for axing Afridi: Akram