Buoyed by Shikhar Dhawan’s magnificent 137 and Ajinkya Rahane’s aggressive 79, India managed to score 307 for seven after electing to bat first. South Africa crumbled under pressure with some good Indian bowling on show.

At one stage, South Africa looked in control of the run-chase. With the likes of AB de Villiers and Faf du Plessis in the middle, there was no reason to panic. The duo has the ability to shift gears anytime and that danger was lurking through their 68-run stand. Quinton de Kock and Hashim Amla had been dismissed early in the innings as the Indians bowled in the tight channels. But, things seemed to work in favour of South Africa with de Villiers and du Plessis in the middle. UPDATES: India vs South Africa ICC Cricket World Cup 2015

Then came the game changing moment. In the 23rd over, de Villiers played one to the deep on the off-side and set off for a couple. Mohit Sharma came around and threw it into Dhoni’s gloves perfectly as he took his bails off. It was Mohit’s day for he had earlier foxed Amla with a short ball, which was pulled into the hands of fine leg. And then, he dismissed du Plessis a few overs after the de Villiers run-out. South Africa never recovered from that as the spinners strangled them further. Mohammed Shami, Mohit and Ravichandran Ashwin shared the spoils with some good disciplined bowling through the South African innings.ICC Cricket World Cup 2015: SCHEDULE & MATCH DETAILS

Looking back, South Africa would feel that the move to play the extra bowler hurt them. They brought in Wayne Parnell in place of Farhaan Behardien, playing only six frontline batsmen. Parnell conceded 85 runs in his nine overs and South Africa missed that extra batsman in the tall run-chase. Also, they committed uncharacteristic mistakes on the field of play. Hashim Amla had dropped Dhawan when he was on 53, when he failed to hold on to a sharp chance at point. JP Duminy also missed out on a simple run-out off his own bowling. Dhawan went on to score 137. ICC Cricket World Cup 2015: POINTS TABLE

One could say that the pattern to India’s innings was quite similar to their game against Pakistan. There were two main partnerships that set the platform, with a few wickets falling at the end. This time, Dhawan scored a magnificent hundred after India had lost Rohit Sharma early. Virat Kohli played the calming role again as his 46 allowed Dhawan to play himself in. Dhawan increased the tempo as the innings progressed and played some great shots through his innings of 137. India vs South Africa, ICC Cricket World Cup- In Photos

Ajinkya Rahane also made a huge difference during his counter-attacking innings of 79 off 60 balls. He walked in when about 23 overs were left. India may have considered sending Suresh Raina, given his form in the previous game. They backed their No. 4 Rahane to come good and he delivered some good knockout punches in the end. One can say that he was the difference between India getting 280 and 307.

India now head to Perth, where they will spend over a week. Their next game is against the United Arab Emirates on February 28. South Africa will fly to Sydney, where they will face the unpredictable West Indian juggernaut. India maintain their spot at the top of the table with this win and two victories against the big sides have put them in a good position early in the tournament. 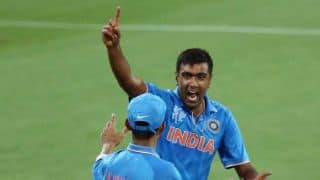